Home / Entertainment / Disney / Elsa Coloring Pages And FROZEN Activity Sheets!
♥ If you love this post, please consider sharing it & leaving a comment below! ♥
* UPDATE * 1/22/14 – I’ve added some additional FROZEN downloads including some Elsa coloring pages, how to make a paper snowflake and a “spot the difference” activity.

I have the cutest Disney’s FROZEN Printables for you today! #DisneyFrozen They include Disney’s Frozen Build-A-Snowman, Maze and Memory-Cards. All you have to do is click the download button below, save them to your computer and print when ready. Your kid swill love these fun Disney FROZEN printable activity sheets! 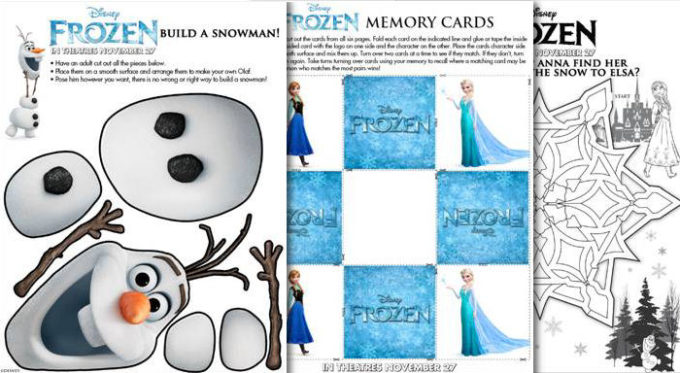 In “Frozen,” fearless optimist Anna (voice of Kristen Bell) teams up with rugged mountain man Kristoff (voice of Jonathan Groff) and his loyal reindeer Sven in an epic journey, encountering Everest-like conditions, mystical trolls and a hilarious snowman named Olaf (voice of Josh Gad) in a race to find Anna’s sister Elsa (voice of Idina Menzel), whose icy powers have trapped the kingdom of Arendelle in eternal winter.

Next postGearing Up For Winter Cleaning With BISSELL