Home / Entertainment / Disney / New Movie Clips From Disneynature BEARS!
♥ If you love this post, please consider sharing it & leaving a comment below! ♥

I have two new really cute movie clips for you from Disneynature BEARS! 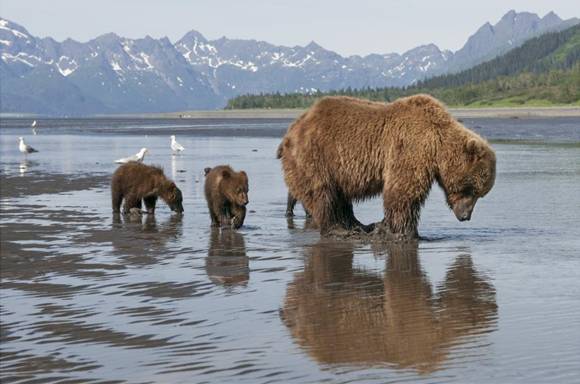 If you’re like me, you’re really excited to see it but missed the April 18 debut. Clay had to work and then with all the Easter excitement and his birthday party over the weekend, a trip to the movies just wasn’t happening. If for some reason you haven’t seen the previews and have no idea what I’m talking about, check out the darling clips below. Then head to the theater to watch it!

Be sure to grab your Disneynature BEARS Printable Activity Sheets while you’re here. Your kids will love them!

In an epic story of breathtaking scale, Disneynature’s new True Life Adventure “Bears” showcases a year in the life of a bear family as two impressionable young cubs are taught life’s most important lessons. Set against a majestic Alaskan backdrop teeming with life, their journey begins as winter comes to an end and the bears emerge from hibernation to face the bitter cold. The world outside is exciting—but risky—as the cubs’ playful descent down the mountain carries with it a looming threat of avalanches. As the season changes from spring to summer, the brown bears must work hard to find food—ultimately feasting at a plentiful salmon run—while staying safe from rival male bears and predators, including an ever-present wolf. “Bears” captures the fast-moving action and suspense of life in one of the planet’s last great wildernesses—Alaska!  Directed by Alastair Fothergill (“Earth,” “African Cats” and “Chimpanzee”) and Keith Scholey (“African Cats”), and narrated by John C. Reilly, “Bears” arrives in theaters April 18, 2014, to celebrate Earth Day.

Disneynature was launched in April 2008. Its mission is to bring the world’s top nature filmmakers together to share a wide variety of wildlife stories on the big screen in order to engage, inspire and educate theatrical audiences everywhere. Walt Disney was a pioneer in wildlife filmmaking, producing 13 True-Life Adventure motion pictures between 1948 and 1960, which earned eight Academy Awards®. The first four Disneynature films, “Earth,” “Oceans,” “African Cats” and “Chimpanzee,” are four of the top five highest overall grossing feature-length nature films to date, with “Chimpanzee” garnering a record-breaking opening weekend for the genre. Disney’s commitment to conservation is a key pillar of the label and Disneynature films empower the audience to help make a difference. Through donations tied to opening-week attendance for all four films, Disneynature, through the Disney Worldwide Conservation Fund, has planted three million trees in Brazil’s Atlantic Forest, established 40,000 acres of marine protected area in The Bahamas, protected 65,000 acres of savanna in Kenya, protected nearly 130,000 acres of wild chimpanzee habitat, educated 60,000 school children about chimpanzee conservation and cared for chimpanzees.

Did you see Disneynature’s BEARS? What did you think?