Home / Books / Crashers by Lindy S. Hudis
♥ If you love this post, please consider sharing it & leaving a comment below! ♥ 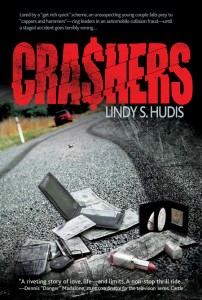 Ever been a victim of Insurance Fraud?

Sadly, it really does happen every day. I just finished reading a book about exactly that.

About the Book:
Crashers. A riveting story of love and desperation, greed and redemption.

Fraudulent car accidents is a multi-million dollar racket, involving unscrupulous medical providers, personal injury attorneys, and the cooperating passengers involved in the accidents—and who also receive a portion of the illegal proceeds. Such is the fate of newly engaged, Nathan and Shari, whose joy is tempered by the dark cloud of mounting debt.

A chance encounter with a stranger in whom Shari confides her troubles proves fortuitous: he tells her of a get-rich-quick scheme that will put her and her fiancé on easy street. Seduced by the chance to move from hard times to good times in no time, Sheri takes the carrot offered her, and finds herself acting as a “stuffed passenger”—the “victim” in a staged auto accident. The act goes according to plan and Shari gets her payday, but getting out and breaking free of the insurance fraud underworld will take nothing short of a miracle.

Crashers is one of those books that makes you really wary of the drivers around you. Insurance fraud is something that happens every day, but to think that it could happen to you is really scary. And to think that someone you know could get caught up in the scheme is even scarier!

I liked the storyline of Crashers but I have to warn you, it is FULL of bad language. Like, every page full. The F-Bomb is dropped more than a couple of times and to be perfectly honest with you, I don’t see why? Sometimes, the hostility and language wasn’t really even prudent to the story at the time. So if you can’t tolerate foul language, this might not be the book for you.

As far as the story goes, it was a great storyline. Sheri was desperate to make ends meet. She and Nathan were struggling to make it. A, seemingly easy, money making opportunity presented itself and she took it. I can see how that really could happen with those down and out and in a lot of debt.

Sheri’s actions were a little odd to me. She did a 180° with her personality which kind of took me by surprise. But that did make for a good storyline. I think, if you can get past the language, you will really like Crashers. It has mystery with characters trying to learn who the big boss is, lust and romance and lots of action.

I can DEFINITELY see this book as a movie and can’t wait to see who would play the characters!

Author Bio
Lindy S. Hudis is a graduate of New York University’s Tisch School of the Arts. She is the author of a suspense novel, Weekends. Her screenplay “The Lesson” was made into an independent film and was screened at the Seattle Independent Film Festival and Cine-Nights in 2000. She lives in California with her husband and two children.

Links to Crashers on Amazon.com Ebook version and Printed version.

Be sure to keep an eye out for the Crashers Book giveaway starting November 12. I will have a post about that then.

Disclosure: I received this book to review through Moms With Voices Media, all the opinions above are 100% my own.

Next postWRECK-IT RALPH in Theaters Plus Puzzle Download & Featurettes!