Home / Entertainment / Disney / The Jungle Book Now Playing In Theaters!
♥ If you love this post, please consider sharing it & leaving a comment below! ♥

Do you remember reading The Jungle Book when you were a kid, or watching the old movie or cartoon? I love it! There is a new version that I am excited to see. This movie is now playing in theaters! 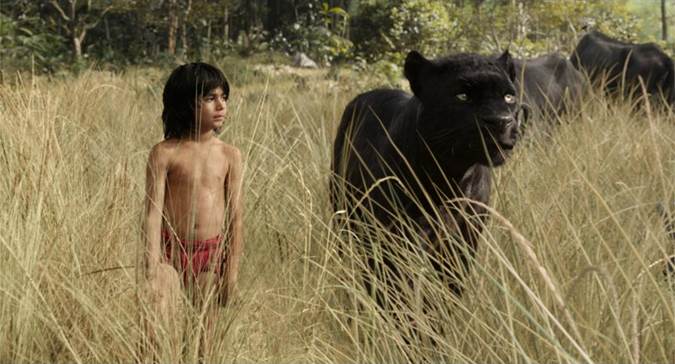 To kick off the movie I have a video highlighting the voices in the film including Bill Murray (“Baloo”), Sir Ben Kingsley (“Bagheera”), Lupita Nyong’o (“Raksha”), Scarlett Johansson (“Kaa”), Idris Elba (“Shere Khan”),Christopher Walken (“King Louie”), Giancarlo Esposito (“Akela”) and Neel Sethi who plays Mowgli, the only live action character in the film!

Check it out and let me know what you think. And don’t forget to grab The Jungle Book activity sheets that we have for you!

LOINCLOTH LOGIC – Mowgli sports a red loincloth in the film, but costume designer Laura Jean Shannon had her work cut out for her. “Mowgli’s immersed in water and mud, he gets rained on, he runs,” says Shannon. “We even rigged a hidden safety harness into the costume because Mowgli hangs on tree limbs and cliffs. Each of the loincloths—we ended up with 16 or 17—had a very specific purpose.”

DETAILS, DETAILS – The team at Moving Picture Company (MPC) were responsible for animating more than 70 species, crafting 100 million leaves and simulating earth, fire and water. A team of more than 800 computer graphics artists spent more than a year on the project.

BUILDING A JUNGLE – Artists digitally built most of the jungle environment that appears in the film, creating moss, bark, rock, water, grass, trees, leaves that were all inspired by their real-life counterparts in India. The virtual environment makes up 80 percent of the film frame 100 percent of the time.

PLACES, PLEASE – Filmmakers utilized motion capture technology to help them visualize the entire film prior to live-action production kicking off. The process involves special body suits adorned with dots that translate into the computer. Even director Jon Favreau suited up for select scenes.

ME AND MY SHADOW – One of the challenges filmmakers faced by pairing a live-action Mowgli with computer-generated animal counterparts was that the CG creatures were unable to cast shadows on real-life Mowgli. Visual effects supervisor Rob Legato developed a system that allowed filmmakers to project light and shadows onto Mowgli that represent the creatures that are moving near him.

HONEY, HONEY – Mowgli deals with a lot of honey in “The Jungle Book.” The sweet stuff proved challenging for filmmakers, who wanted it to look authentic—yet still appealing. Color and viscosity had to be considered, as well as how to make the honeycomb it comes in.

INSPIRED BY WALT – Disney’s 1967 animated film, “The Jungle Book,” was the last film that Walt Disney oversaw. He passed away in 1966, the year before the film’s release.

OSCAR NOM – The iconic song “The Bare Necessities,” written by Terry Gilkyson, was nominated for an Academy Award® in 1968.

STUDIO BRATS — Composer John Debney, who wrote the score for the new, live-action film “The Jungle Book,” is the son of Louis Debney, who worked for Walt Disney. “When I was a youngster, they were making this incredible magical film called ‘The Jungle Book,’ and I was sort of a studio brat,” says Debney. “I got to know the young man Bruce Reitherman who played Mowgli. We would go on adventures around the world with his family.”

SCOUTS’ HONOR — According to actor Ben Kinglsey, author Rudyard Kipling’s characters are part of being young in the U.K. “Before a boy in the U.K. joins the Boy Scouts, he joins the Cubs,” says Kingsley. “And our Cub Chief was always called Akela. In fact, all the Scouts’ names come from Kipling’s writings.”

Are you excited for the new The Jungle Book film?

Next postTeenage Mutant Ninja Turtles: Out of the Shadows New Trailer