Home / Downloads & Printables / The Threat Of RSV At Home And In Child Care And School Settings
♥ If you love this post, please consider sharing it & leaving a comment below! ♥

Respiratory syncytial virus, also known as RSV, is a common, seasonal virus that affects two-thirds of all infants by age one and almost 100% of babies by age two, because it’s highly contagious.  RSV can live on surfaces (doorknobs, countertops, toys, bedding) for several hours and is often spread through touching, hugging and kissing. Daycare increases this risk of RSV spreading as children are constantly sharing toys, tables and high chairs as well as eating and napping in close quarters.

I have 4 children and our two youngest both had RSV as infants. Because it is a virus, there really isn’t a “cure” and it has to run its course but many infants end up in the hospital from serious complications and breathing issues.

When each of our daughters had RSV, they began showing symptoms just as you would with any cold, runny nose, sneezing, etc. Along the way, they developed a fever and cough. Over the course of a day, that cough had turned into wheezing and they didn’t seem to be breathing well. With our older daughter, who had it first, we rushed her to the ER, not knowing what was going on. We thought she may have developed asthma. She was only 2 months old at the time and we were scared to death! The ER did a breathing treatment and sent us home with instructions to get her in to the pediatrician the next day. They did NOT swab her or diagnose her with anything. I was pretty upset but it was already early morning and the breathing treatment had helped tremendously. So we knew that it was only a couple of hours before she would be in to see the Dr and if she had any trouble, we would take her to another ER!

When our youngest daughter was born a few years later, we had already seen first hand how RSV works so we knew what to watch out for. As soon as she started showing symptoms, we called her pediatrician and got her to the Dr.

Both times, the girls were diagnosed from a nose swab. We were given antibiotics to fight off any infection like Bronchitis that was developing. With our older daughter, we were given a Nebulizer and Albuterol and told to give her breathing treatments every four hours to help keep her airways open. Since we already had the Nebulizer the second time, we were just given a new prescription for Albuterol and told the same thing.

I have to tell you, when your child goes from a healthy, happy 2 month old to not being able to breathe and has a bluish tint to their lips, you FREAK OUT! I was scared to death. I had 2 older children but had never dealt with anything like RSV.

Now, we are better equipped with knowledge, experience and better hygiene practices. We teach our children to wash their hands regularly, use hand sanitizer in class if they sneeze or couch, don’t share drinks and food, etc. We’re getting there. The younger ones are starting to follow in their older siblings footsteps. And while we aren’t having any more children, we can teach and inform the new mommies in our lives and help them be in the know about RSV!

I want to give you some symptoms to look out for as well as an infographic and some facts. 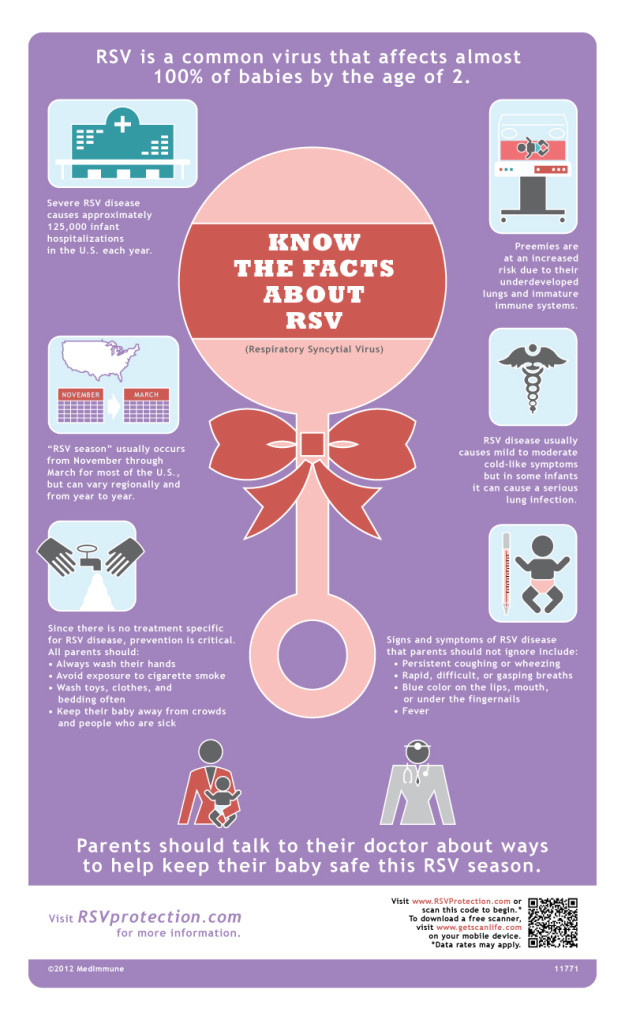 RSV typically causes mild to moderate cold-like symptoms, but in some babies it results in a serious respiratory infection. Those most at risk for severe RSV include premature infants, as their lungs aren’t fully developed and they have fewer infection-fighting antibodies than full-term babies.

NOTE: Our daughters were NOT premies. They were both, healthy, full-term babies and still contracted RSV very easily. So please don’t blow this info off just because your baby wasn’t born prematurely. They can STILL get very sick from RSV!

The RSV season typically runs from November through March, so during the winter months parents should be especially careful to watch for signs of RSV. Below are symptoms of severe RSV infection that require immediate medical care:

If a child has milder symptoms of RSV, the virus will likely run its course without any cause for parental alarm. It is important; however, for these parents to remember that even a mild case of RSV can be spread to other children, some of whom may be at high-risk for developing a serious infection from the virus. For this reason, it’s always best to keep a sick child home when possible, to prevent the spread of germs and viruses.

A few facts about RSV that all parents, caregivers and loved ones should know:

I wrote this review while participating in a campaign for Mom Central Consulting on behalf of MedImmune and I received a promotional item to thank me for my participation.”