Wish You Were Here by Beth K. Vogt

Home / Books / Wish You Were Here by Beth K. Vogt
♥ If you love this post, please consider sharing it & leaving a comment below! ♥ 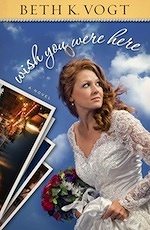 Wish You Were Here is another of my favorite books. It isn’t set in the 1920’s or Amish life like many of my favorites. It is modern and very easy to follow.

About the book:
Wish You Were Here | Beth K. Vogt

Allison Denman is supposed to get married in five days, but everything is all wrong. The huge wedding. The frothy dress. And the groom. Still, kissing the groom’s brother in an unguarded moment is decidedly not the right thing to do. How could she have made such a mistake? It seems Allison’s life is nothing but mistakes at this point. And pulling a “Runaway Bride” complete with stealing, er, borrowing her best friend’s car doesn’t seem to solve her problems. Can Allison find her way out of this mess? Maybe she just needs to stop orchestrating everything. Allison prefers being the one in control, and giving it up is not going to be easy. But to find her way again, she will have to believe that God has a plan for her and find the strength to let Him lead.

Kissing your future brother-in-law 5 days before your wedding isn’t the smartest thing in the world to do. Ditching your groom-to-be at the altar and then completely ignoring and hiding from him afterwards isn’t smart either. But that is what the main character of this book, Allison, did. Her head is so messed up. She didn’t like her dress. Her nerves were in overtime. She honestly thought she was still in love with Seth and at one time she was. But Daniels kiss made hr realize that she had feelings for him.
This is one of those novels that seems sort of “chicky” at first. But it has depth. Allison and Daniel both have to look at themselves and decide who they want to be and where they want their lives to go. Allison was so used to following everything Seth said or did that she didn’t really know who she was anymore. Daniel, his brother, is the complete opposite of him. I’m talking polar opposites! He is rugged and outdoorsey. Seth is suit and tie, total businessman. Everything is on a schedule with Seth and has to be organized and planned out. So what Allison did, especially without telling him why, really threw him.

I think the book is written really well. The author took the story in just enough different directions to keep me interested. She added faith and seeking God in a way that didn’t force it upon you or seem out of context. Everything flows really nicely and this is another book that I didn’t put down until I had finished the story! 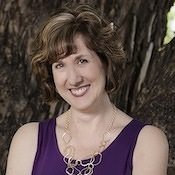 Beth K. Vogt provides her readers with a happily ever after woven through with humor, reality, and God’s lavish grace. She’s a non-fiction author and editor who said she’d never write fiction. She’s the wife of an Air Force physician (now in solo practice) who said she’d never marry a doctor-or anyone in the military. She’s a mom of four who said she’d never have kids. Beth has discovered that God’s best often waits behind the doors marked “Never.” She writes contemporary romance because she believes there’s more to happily ever after than the fairy tales tell us. Beth earned a journalism degree from San Jose State University and met her husband Rob when he knocked her down at a karate studio. They’ve been married for 31 years. They have four children, ranging in ages from 28, 25, 23 and – thanks to a funny thing happening on their way to the empty nest-a 10-year-old. The Vogt Team, which now includes a “daughter-in-love” and “son-in-love,” enjoys hiking and camping in Colorado. Read more about Beth at her website:https://bethvogt.com
Link to buy the book: https://ow.ly/aQTEk
Check out the entire LitFuse Blog Tour here: https://litfusegroup.com/blogtours/13480251

Enter to win an iPad!

Celebrate with Beth by entering her Wish You Were Here Giveaway!

One “happy” winner will receive:

Disclosure: I received a complimentary copy of “Wish You Were Here” as a member of LitFuse. No monetary compensation was received. all opinions are my own.