Baroness by Susan May Warren

Home / Books / Baroness by Susan May Warren
♥ If you love this post, please consider sharing it & leaving a comment below! ♥ 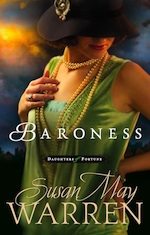 The “Roaring Twenties” is one of my favorite time periods.

My grandmother was born in the early twenties and while most of her heyday was in the thirties, many of her sisters were living it up in the twenties.

Baroness is book two in the Daughters of Fortune series. The first book, Heiress (which I haven’t yet read) was about sisters Jinx and Esme and Baroness is about their daughters, Lilly and Rose, so it can easily be read separately from the series. In Baroness Lily and Rose, daughters of an empire coming of age in the roaring twenties, can have anything they want … except freedom.

Expected to marry well and to take the reins of the empire, they have their lives planned out for them. But, Lilly, Esme’s daughter longs to return home to Montana, to adventure outside the confines of New York City. And Jinx’s daughter Rosie dreams of the bright lights of the newly emerging silver screen. But following their dreams – from avant garde France, to Broadway, to the skies in the world of barnstormers and wing-walkers will take all their courage.

And if they find love, will they choose freedom or happily ever after?

Both girls lives take several twists and turns throughout this book. Both seem to be filled with more heartache then happiness. The beginning starts out a little slow and at first, Lilly seems like she is going to be the boring book-nerd with her head just in a book non-stop while she pines away for Montana, home of her late father. She wants nothing more than to return to his ranch and live the life of a rancher, riding horses and tending to the ranch.

After agreeing to meet Rose at a cafe, she is nearly run down trying to cross the street but is saved by a handsome barnstormer who lures her into the life of adventure, danger, life on the lam and heartbreak.

Lilly, the girl who wants nothing more than to be on the big screen but she is hanging with the wrong crowd. Her friends are made up of wild and crazy dames living it up 1920’s style. Smoking and drinking are the “in-thing”. And she wants desperately to belong with her gang of friends. Heartache also sends her home but she finds herself in trouble… again. Her life also takes a very odd turn and she finds herself in a completely different life than she imagined.

While my great-aunts might not have had the same adventures as Lilly and Rose, I know they did some living in the 20’s and Baroness gives me a great glimpse, not only into their lives, but the lives of the Flapper’s, good-time gals, famous movie stars, baseball players, gangsters and the well-to-do from that era. It was a fantastic read and I can’t wait to , not only read the first in the series, but read future releases as well!

Find out more from Behind the Pages: https://www.susanmaywarren.com/books/baroness 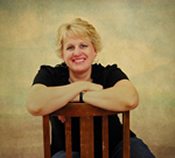 About Susan:
Susan May Warren is the RITA award-winning novelist of over thirty novels. A five-time Christy award finalist, a two-time RITA Finalist, she’s also a multi-winner of the Inspirational Readers Choice award, and the ACFW Carol Award.

A seasoned women’s events speaker, she’s a popular writing teacher at conferences around the nation and the author of the beginning writer’s workbook: From the Inside-Out: discover, create and publish the novel in you!.

She is also the founder of www.MyBookTherapy.com, a story-crafting service that helps authors discover their voice. You can find her online at www.susanmaywarren.com.

Link to buy the book: https://ow.ly/ajLQF

This book was so much fun to read! If you’ve read it any of Susan May Warren’s book, what do you think?

Disclosure: I received a complimentary copy of Baroness by Susan May Warren as a member of Litfuse. no monetary compensation was received. All opinions are my own.

Next postHop Family Night with Blockbuster and Digiorno Pizza #CouchCritics