The Maid of Fairbourne Hall Review.

Home / Books / The Maid of Fairbourne Hall Review.
♥ If you love this post, please consider sharing it & leaving a comment below! ♥ 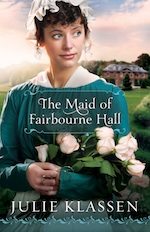 I have another great book for you today, The Maid of Fairbourne Hall, by Julie Klassen! The link will be listed below and as always, you can also find it in our [intlink id=”655″ type=”page”]store[/intlink], where we list the products we’ve had the pleasure of reviewing.

In The Maid of Fairbourne Hall, Margaret Macy is led to flee her home when an awful step-father tries to force her to marry his nephew. When Margaret doesn’t agree to marry him on her own, the step-father, insists that his nephew do anything possible in order to get her to marry him. Even ruin her reputation and forcing himself upon her. Margaret is about to inherit a nice sum of money and the greedy step-father wants it all for himself. So, Margaret runs away.

During her run, she learns SEVERAL valuable lessons about humanity. Being from a wealthy family, she always took for granted how hard their servants worked for them. She was snooty and spoiled and very demanding. After she runs away though, she is forced to work as a maid in order to support herself and stay hidden. She ends up very near the man she “dumped”, Nathanial Upchurch and the man she wants to marry. His brother, Lewis.

Being on the run does Margaret a world of good and teaches her, and us, the value of friendship, humility and hard work. It isn’t your typical Christian romance. Instead it is a great romance with a little bit of action and danger along with a healthy dose of life lessons. I really enjoyed The Maid of Fairbourne Hall. It was different from the cowboy novels I typically read and made for a fantastic read.

I did learn one thing about myself that is somewhat humorous. I read with an accent!!! This story takes place around London, England and I realized while reading it that I heard a British accent in my head when I was reading. I hadn’t realized that before. Too funny! Do you do that?

About the book:
To escape a scheme to marry her off to a dishonorable man, Margaret Macy flees London disguised as a housemaid. If she can remain unwed until her next birthday, she will receive an inheritance, and with it, sweet independence. But she never planned on actually working as a servant. And certainly not in the home of Nathaniel and Lewis Upchurch–both former suitors.
As she fumbles through the first real work of her life, Margaret struggles to keep her identity secret when suspicions arise and prying eyes visit Fairbourne Hall. Can she avoid a trap meant to force her from hiding?

Julie Klassen loves all things Jane–Jane Eyre and Jane Austen. A graduate of the University of Illinois, Julie worked in publishing for sixteen years and now writes full time. She has won the Christy Award: Historical Romance for The Silent Governess (2010) and The Girl in the Gatehouse (2011) which also won the 2010 Midwest Book Award for Genre Fiction. Julie and her husband have two sons and live in a suburb of St. Paul, Minnesota.

Checkout the entire Litfuse Blog Tour!
Enter Today and Save the Date-3/15!

You can read more about the giveaway here.

Disclosure: I received a complimentary copy of The Maid of Fairbourne Hall for review purposes. No monetary compensation was received. All opinions are my own.