Disclosure, I received a complimentary Yonanas Banana Ice Cream maker to facilitate my review. All opinions are my own and those of family members participating in this review. No monetary compensation was received.

Mmm, my family and I are totally loving the Yonanas Banana Ice Cream Maker! I’ve created a quick vlog as well as written review below:

Yonanas is a small kitchen gadget that emulsifies frozen fruit ONLY into a creamy dessert that looks, tastes and feels like soft-serve ice cream.

It is super easy to use and in mere minutes you end up with a cold, creamy and delicious treat that rivals any ice cream. The best part? It’s totally healthy with NO fake, nasty ingredients. Just fruit. You can also make it without bananas for a fruity sorbet but we tried using bananas for each of our recipes for the review because it is called yoNANAS after all. You can also add to your yummy ice-creamy treat by adding  chocolate, nuts or nut butter you might want to add.We even tried it with canned pumpkin! You can see that one below.

The first we tried was banana-blueberry. The first step is t freeze your fruit. You’ll want to use really ripe bananas. The ones with the “cheetah-spots”. I was told you can ask your produce manager at your local grocery store if they have any in the back that are over ripe and sometimes they’ll give them to you for free! It never hurts to ask, right?

So, peel your overly ripe bananas and put them in a freezer bag and pop the in the freezer. Put your other fruit in there too. You don’t have to freeze the chocolate chips, nuts or nut butters as you’d mix them in last.  Once your fruit it good and frozen, take it out to thaw for 10 – 15 minutes. 15 minutes worked perfectly for us and let the bananas push through easily while still being very cold. Push 1/2 banana into the chute and push down with the included plunger. 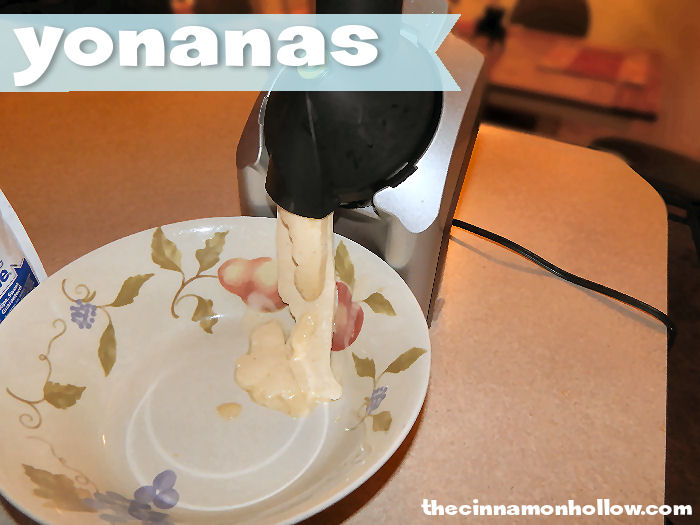 It may take another 1/2 banana before you start to see it really come through. But once it does, it will come out easily. Then, add 1/2 cup frozen blueberries. I just used the pre-packaged, pre-frozen blueberries at Wal-Mart, thawing them on the counter about 15 minutes. Worked perfectly! 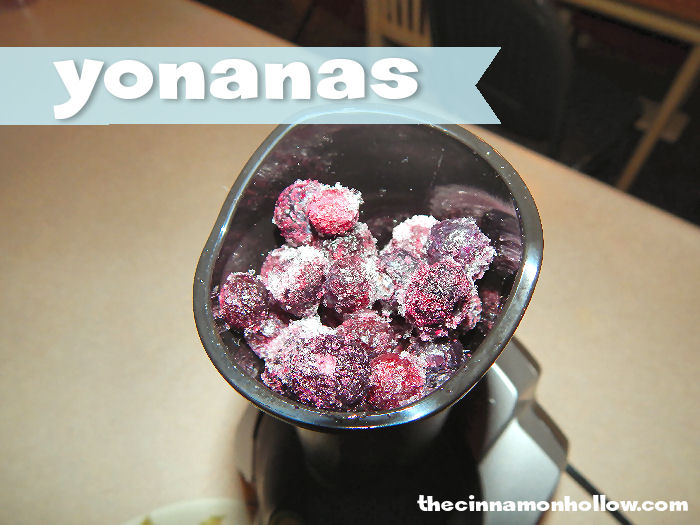 Push your blueberries through. Doesn’t that look so good? You could totally do this with just frozen blueberries and leave the banana out if you’re not a banana fan. You could use other frozen fruits too and even mix them! 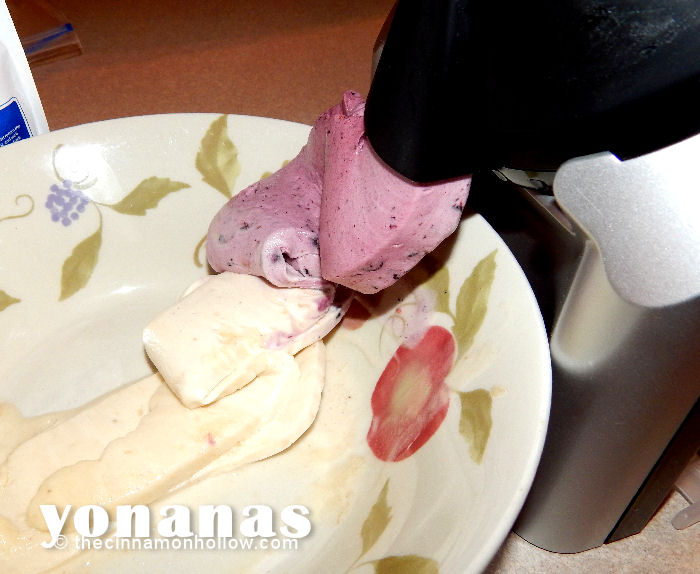 Once we did, we had a yummy, creamy treat. All 4 of my kids LOVED it. I LOVED it. It can’t even begin to describe how something with NO added sugar, NO added vanilla or other flavors could be as delicious as this was, but I really, really did love it. And it was so easy to make. The cleanup was unbelievably easy too. Just remove the chute assembly from the Yonana maker base by twisting it counter clock-wise and separate the individual parts. You can wash them by hand or in the dishwasher. So easy!

Ok, I am in fall mode and wanted a fall treat. So we decided to try using some canned pumpkin. The only ice cube trays I have are seasonal ones so I used our cute little Jack-o-Lantern and Skull and Cross Bones trays that I got at Dollar General last year. They actually worked perfectly. The frozen pumpkin pieces fit just right in the chute.

I mixed one 15 oz can of pureed pumpkin with 1 teaspoon cinnamon and 1/2 teaspoon nutmeg. Then I put it in my trays and froze it overnight.  Aren’t the pumpkin cubes awesome? 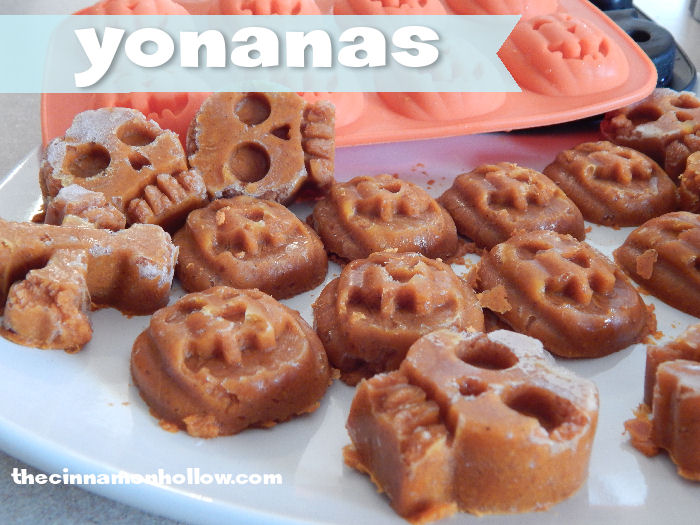 Then I alternated 1/2 frozen (thawed 15 minutes) banana with 1 – 2 frozen (thawed 8 – 10 minutes) pumpkin cube. We ended up with the most delicious, fall inspired “ice cream” ever! I think next time, I might add a bit more cinnamon, though. It was a bit too pumpkin-y. I’ll also top it with crushed cinnamon graham crackers. That would be really good! 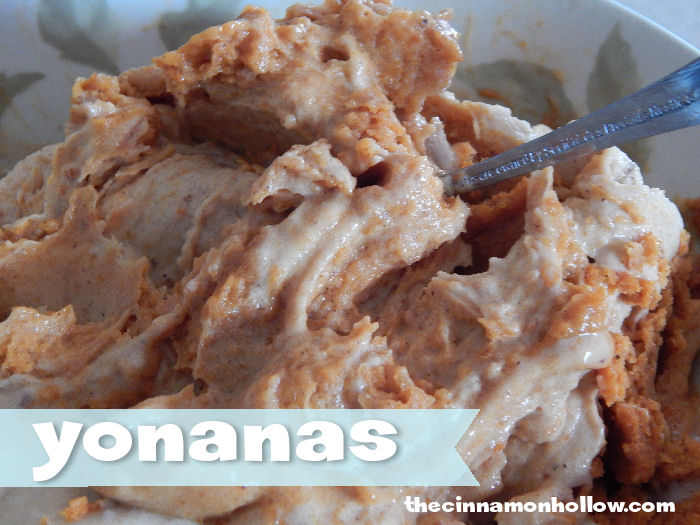 There are several Yonanas recipes over on their site that you can check out. You can order your Yonanas machine there too.

Have you ever tried the Yonanas Banana Ice Cream Maker?