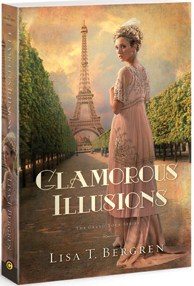 Do you feel like your life is full of Glamorous Illusions?

It was the summer of 1913, and Cora Kensington’s life on the family farm has taken a dark turn. Not only are the crops failing, so is her father’s health. Cora is carrying on, helping her mother run their Montana farm until a stranger comes to call, and everything changes. Cora then learns a secret that will radically change her future: she is the illegitimate daughter of a copper king who has come to claim her.
Cora is invited to take the “Grand Tour” of Europe, a journey intended to finish a person’s education, to solidify an understanding of ancient culture and contemporary refinement. As she travels from England to France with half-siblings she’s never known, Cora encounters the blessings of the Kensington family name, as well as the curses. But when an unbidden love begins to form, she realizes the journey is only beginning.
Faced with the challenge of accepting her father, new family, and the identity that comes with it, Cora also struggles to accept that she is also the daughter of the one true King-a Father who is the only One who can truly heal.

I can imagine what it must be like for Cora. I never met my real father and was raised, since age 6, by my step-dad. We weren’t well off and always struggled to make ends meet. We weren’t desperate, but we weren’t wealthy by any means. So I can imagine what it would be like to have a wealthy parent step in and claim you. To give you a large family when you had none. I can’t imagine what it was like to not have known though. To be raised by a man you loved dearly as a father only to learn he wasn’t your own.

I think Lisa Bergren did a great job writing the emotions that Cora felt. She went from utter shock to rebellion and independence in a matter of moments. While her new brother and sisters called her an interloper, that is exactly what her biological father had become. He stepped in and took over her life when her Papa took ill. She had no choice but to follow him and accept his offer. Deep down she realized it was for the best. But, boy, it was a tough road!

Along the way, Cora dealt with her issues by following her faith and allowing God to take control when she could not. This was such a great lesson. I often forget to “let go and let God”. And that is exactly the message Glamorous Illusions gives us. As far as her brother and sisters. They are so caught up in their wealthy, spoiled lives, they don’t whole-heartedly give her a proper chance. Especially Vivian. Not only does Cora have “Glamorous Illusions” about what life must be like for her new family, they also have illusions about her. Cora is bound and determined to show them who she really is. Even is she is still learning that herself, along the way!

For me, the story ended rather abruptly. I know it is the first in a series but it was a long read that jut sort of stopped. I would have loved to have a bit more closure in the story before moving on to the next part. But overall, it was a great read!

Lisa Tawn Bergren is the best-selling, award-winning author of over 30 books, with more than 1.5 million copies sold. She just finished writing a Colorado historical trilogy (the first book, Breathe, Sing and Claim), and has begun a teen series called River of Time.

Lisa’s time is split between managing home base, writing (including a fair amount of travel writing), consulting and freelance editing (with a little speaking here and there). She’s married to Tim, a liturgical sculptor, graphic designer and musician. They have three kids-Olivia (15), Emma (12) and Jack (7).

All five of the Bergrens make their home in Colorado Springs, Colorado.

For more information on Lisa and to view other books written, please visit her website: https://lisatawnbergren.com

Disclosure: I received a complimentary copy of Glamorous Illusions as a member of LitFuse. No monetary compensation was received. All opinions are my own.