I mentioned a few weeks ago that we had been selected to host a Disney Side @ Home Celebration to show off our #DisneySide with all our family and friends. We held our party last weekend and it was a blast! We had Disney themed decorations. Many were provided in our party pack but Clay and I also bought tons of stuff. I even decorated my bathroom in Mickey Mouse! We may have gone a bit overboard shopping but how often do you get to host a full on Disney Side party?

Our Disney Side @ Home Celebration 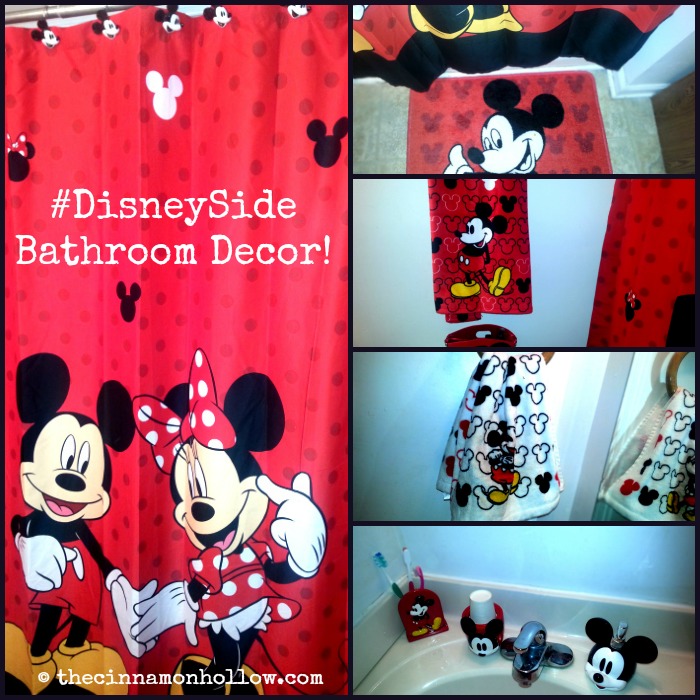 Along with the decorations, we made Disney themed food. I made chicken salad and used some braided bread rolls calling it “Tangled Chicken Salad”. We had “Minnie Bow Tie Pasta”, “mickey Mouse” cucumber sandwiches with bread cut out using my Mickey cookie cutters that came in our party pack, “Minnie Bows” made from strawberries and grapes, Mickey Mouse cupcakes made by my pal, Leona, Frozen themed marshmallow pops, “Tiana’s Jambalaya”,  “Chip and Dale’s” chips and dip, crackers with Mickey Mouse shaped cheese using the cookie cutters, “Hot Diggity Dogs piggies in a blanket and tons of other themed food. I made little labels with the names to tie in the Disney theme. I think the biggest hit with the teens was the chocolate fountain. 😀 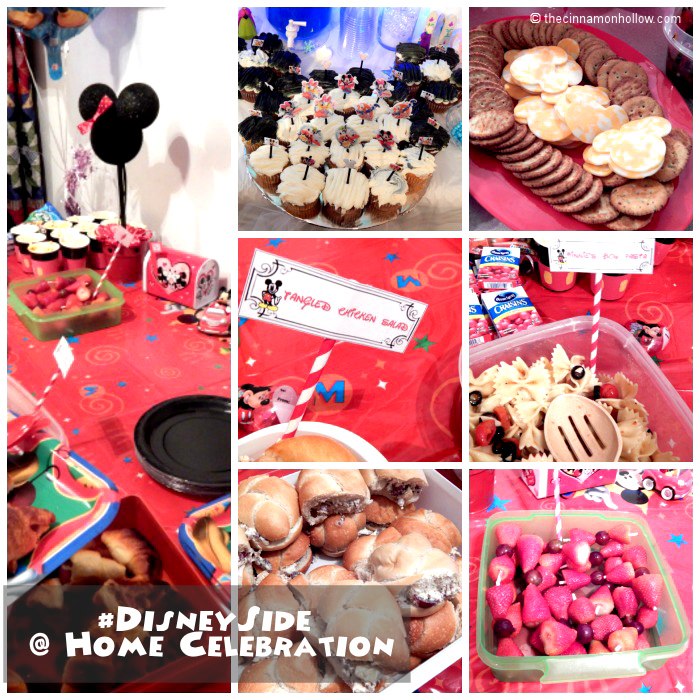 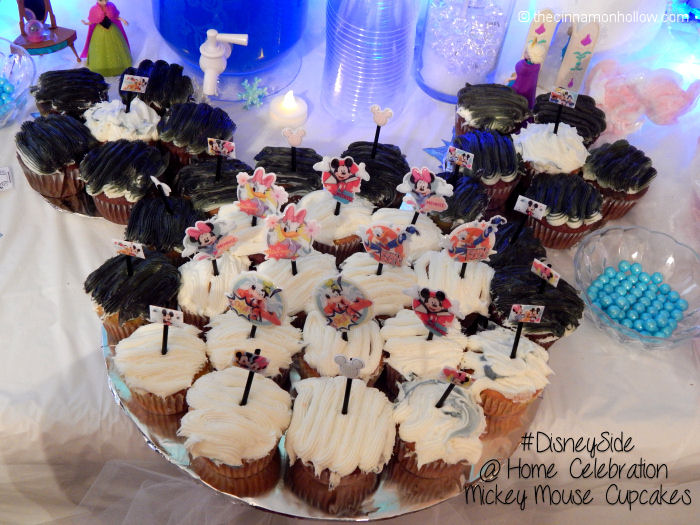 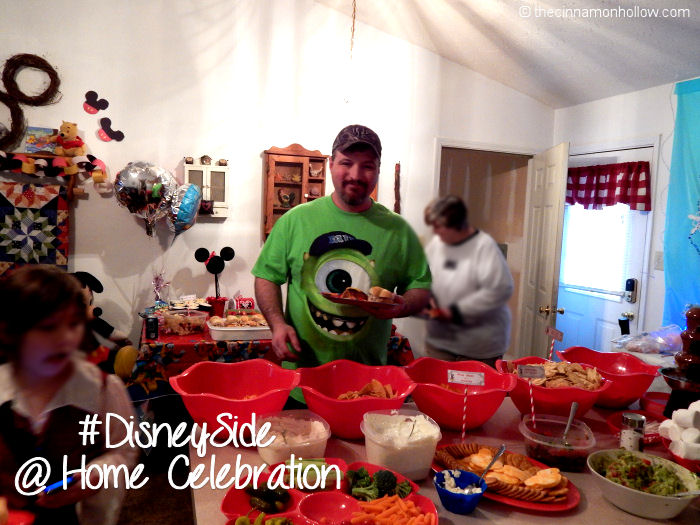 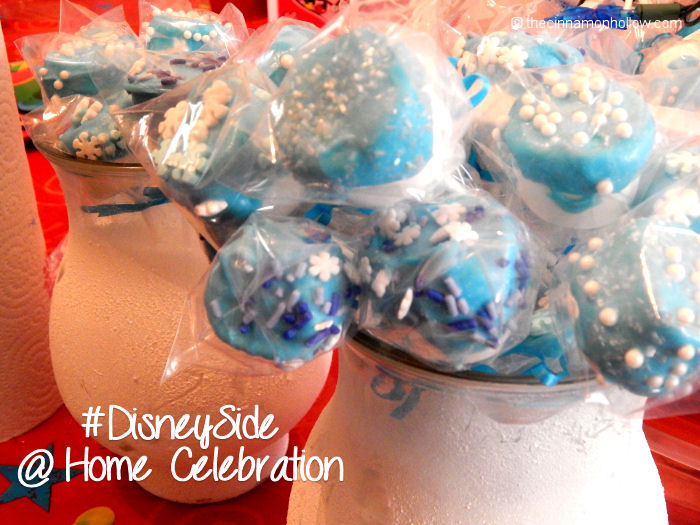 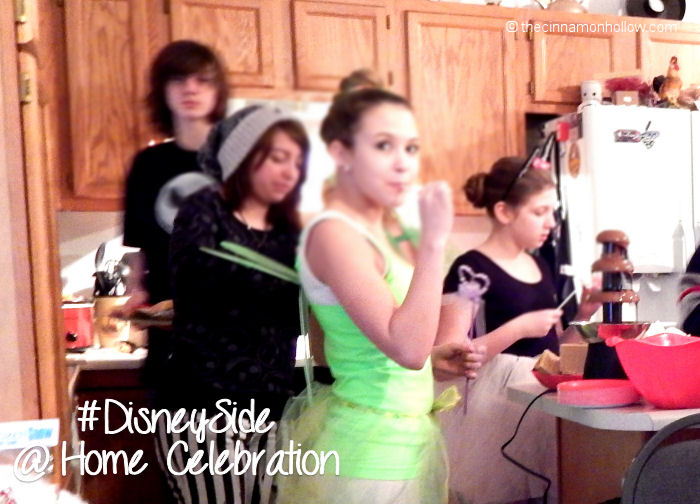 Most of the decor was Mickey Mouse but I did create one table that was based on Disney’s Frozen. I made snowflakes using the free Frozen printables here on our site. They were super easy to make. I also strung about 500 beads, used a teal plastic table cloth as a backdrop and added some garland and pillow stuffing as snow. I sprayed fake snow on two hurricane vases filled them with pillow stuffing, topped it with epsom salts as “snow” and used them to hose our “Frozen” marshmallow pops. I used snowflakes lights to set it off. I think it turned out really pretty. 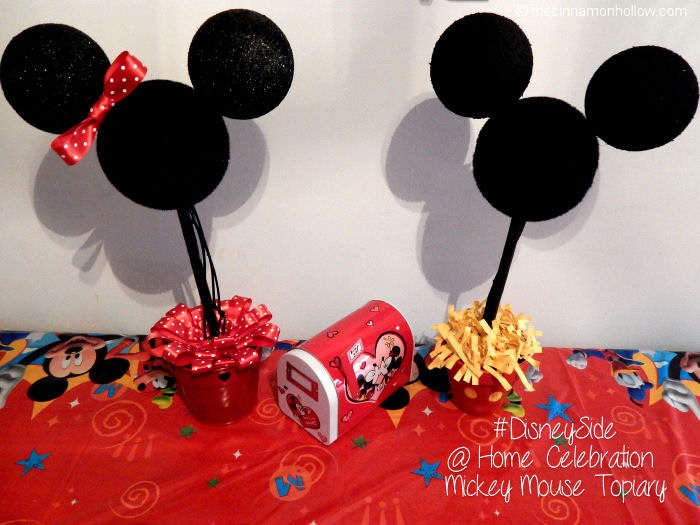 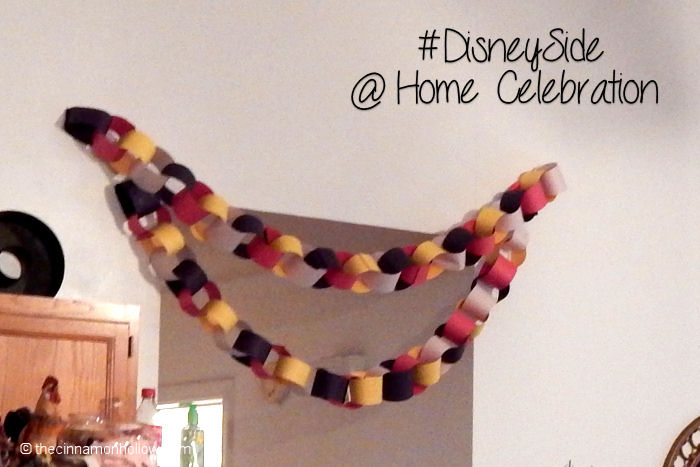 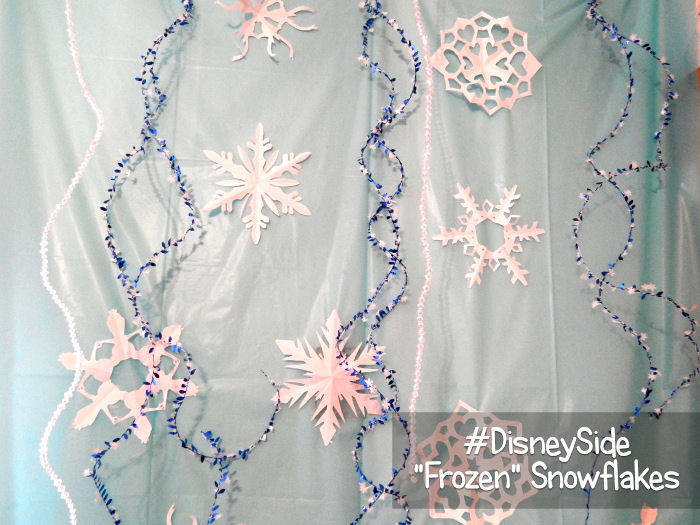 We also had Disney Side themed games and prizes and even had everyone come dressed in their favorite Disney gear or costume. There were prizes for the adult and teen voted best dressed. We had Russell and Carl from “Up”, Tinkerbell, Jake and his Neverland Pirates, Mike from “Monster’s Inc., two Jack Skellingtons’s, a couple Mickey and Minnies, a Minnie ballerina, Elizabeth Swan from Pirates of the Caribbean, Cinderella and Goofy! I loved seeing all the costumes. Everyone outdid themselves. I did NOT get good individual photos or even a group photo. I get so wrapped up in seeing everyone that I forget to get pictures. But I did manage one photo of our “Russell” and a few quick snapshots of guests in passing. My brother in law, Jon, was Russell from Disney’s Up. His friend Amanda dressed up as Carl and even had a cane with balloons tied on it. I so badly wanted a picture of the two of them together. Their costumes were perfect. but, alas, I didn’t get one. I could kick myself for not getting costume photos! 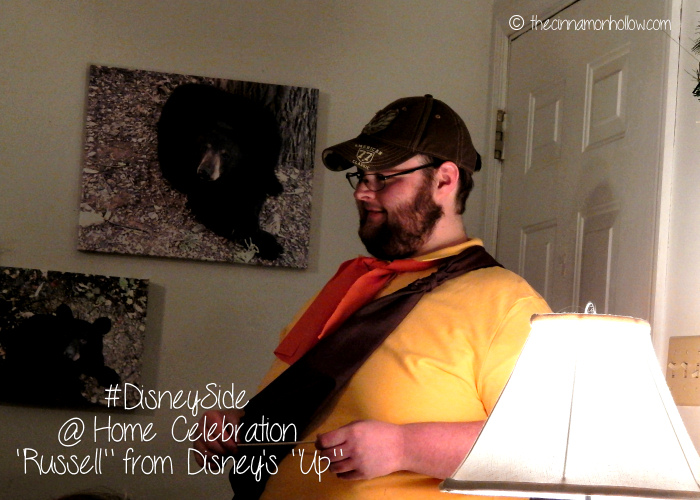 I did get a picture of my painted nails I did for part of my own costume.  I wore Mickey Mouse PJ pants, made an iron on transfer of Mickey and put it on a black t-shirt, wore red and black socks and made Minnie Mouse ears. Clay bought me Minnie Mouse earrings and a necklace for Valentine’s Day and I was all set!

I bought white tote bags and printed Mickey Mouse and each childs name onto iron-on transfers and put them on the bags, then filled them full of Disney themed goodies. So we didn’t vote on their costumes since they were getting so many take home items. Besides, then it comes to the little ones, they’re all winners!

We also played a version of “Dirty Santa” and called it “Mad Mickey”. I didn’t get any photos of it because we were busy playing and I totally forgot, but it was so much fun! In case you’ve never heard of it, here are the basics. Each person brings one wrapped gift. In this case, we asked for Disney themed items. They should all be under $10. You put all the wrapped items in a big pile in the center of the room. Each person draws a number. The person with #1 picks a gift and unwraps it in front of everyone. Then #2 can either steal the gift from #1 or pick a new prize. And so on a so forth. Each prize can only be stolen twice. When playing with only adults, we like to add in a little adult beverage to the wrapped gifts. That really gets the stealing going and makes the game so much fun! If you’re not a drinker, then any awesome larger prize would work as well.

My best gal pal, Leona, served as co-hostess with me and she came up with a couple of really fun “minute to win it” games. One had everyone wearing pantyhose, with a ball in one foot, on their heads and swinging their “Dumbo Ears” to knock over red plastic cups. The other had couples using chopsticks in their mouths to get as many marshmallows from one basket to another. That was hard! 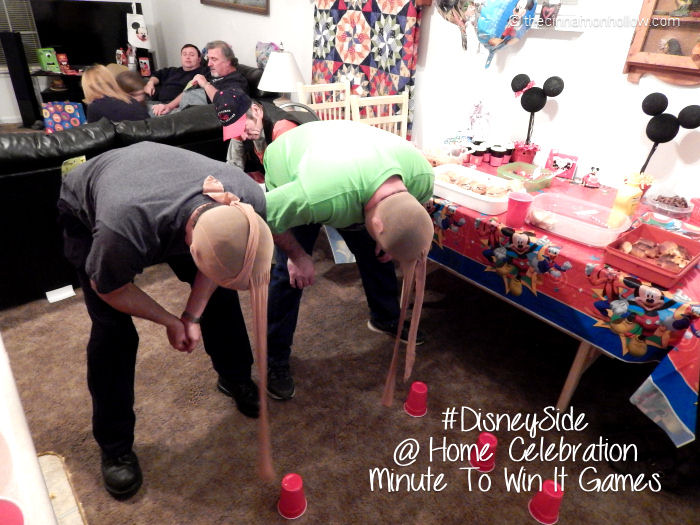 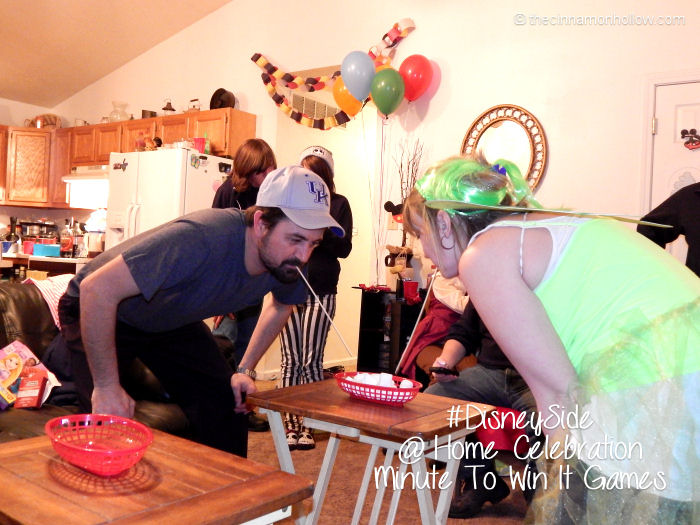 I set up the garage for the little ones and had games and activities they could do. We had a cookie decorating station, coloring area, snowflake making station, tattoos and stickers, crown and wand making station, Mickey Mouse toss games and Pin The Nose On Olaf. I used 97 cent plastic table covers and my green screen stand to make curtains to brighten up the garage area. It turned out pretty well. 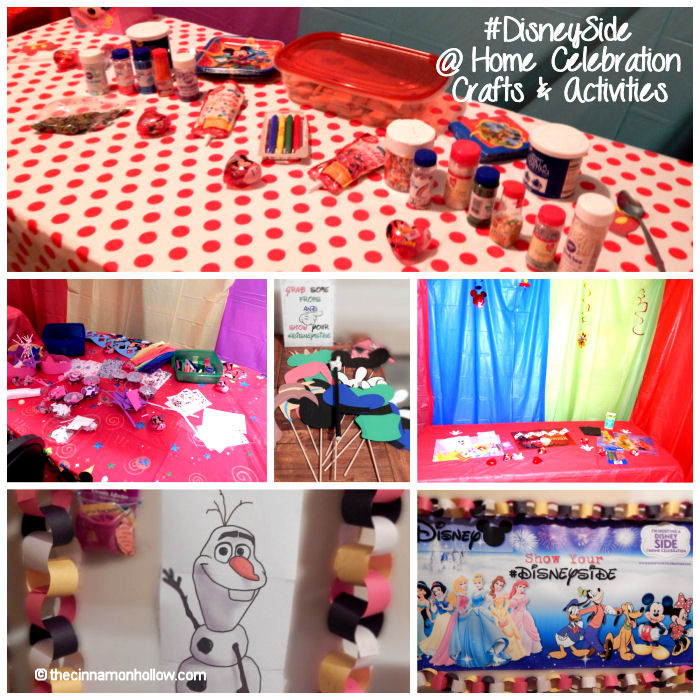 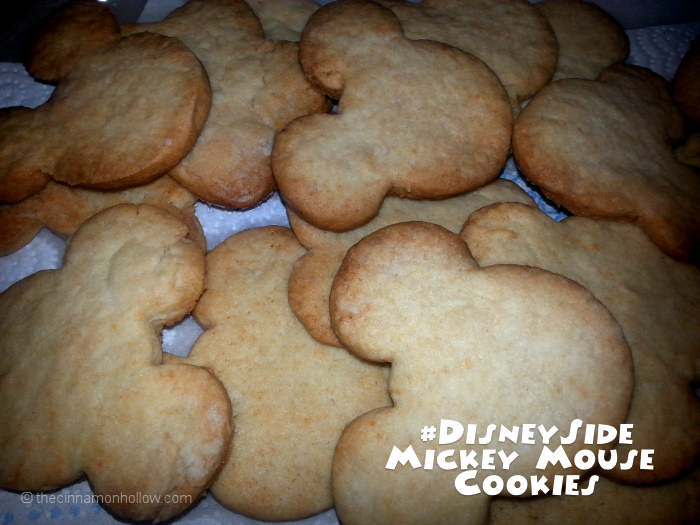 I also printed out and made several photo booth props and had a special banner made to use as a photo backdrop.  I’ll be posting more about the banner next week.

Thank you Mom Select, Disney, HP, American Tourister and ESPN for all the gooodies to help make our party a huge success!!! 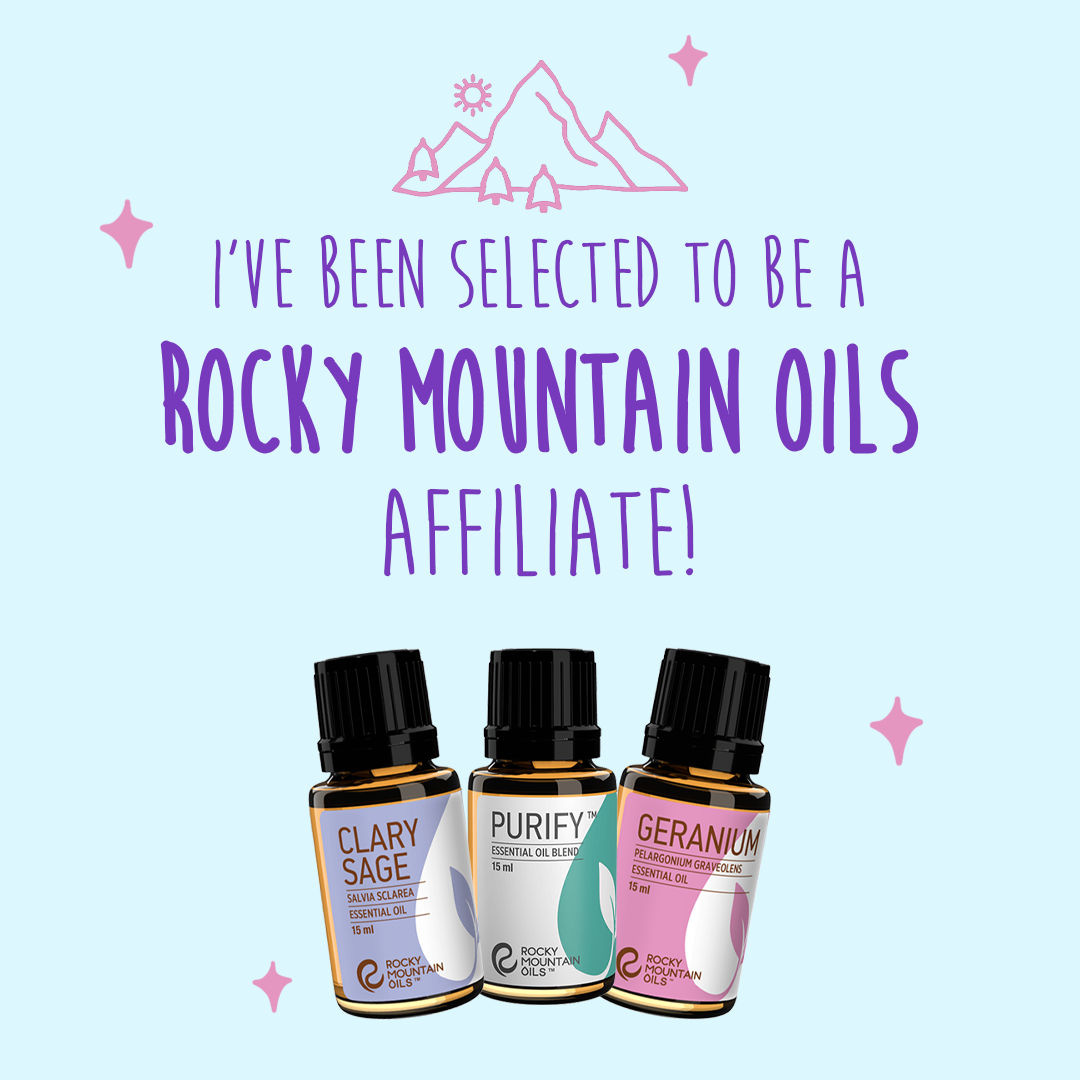 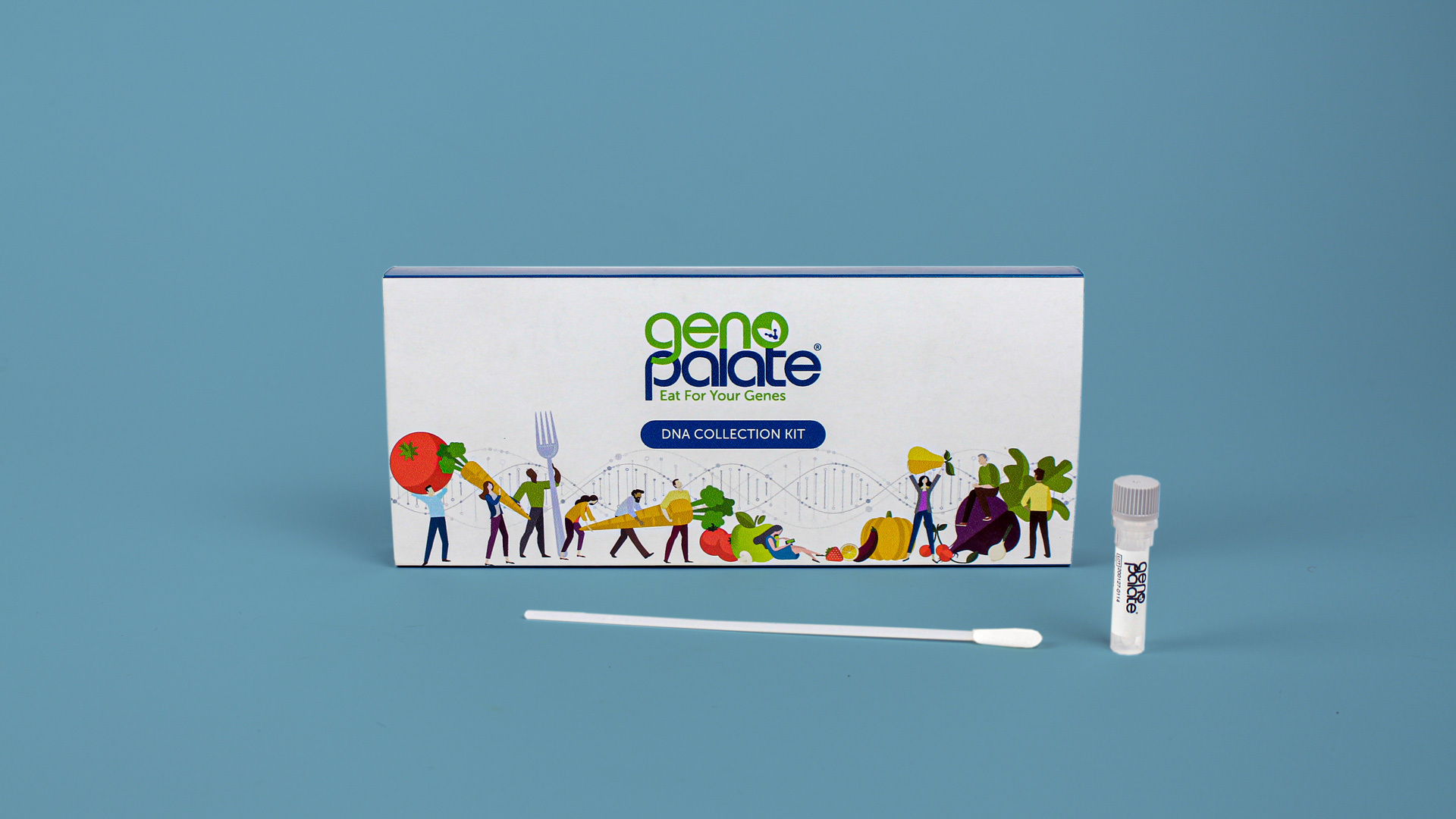 Save 10% with my code: cinnamonhollow

Save 10% off your first order of Hungry Bark! A Custom Meal Plan for Your Unique Dog from HungryBark.com! Shop Now! 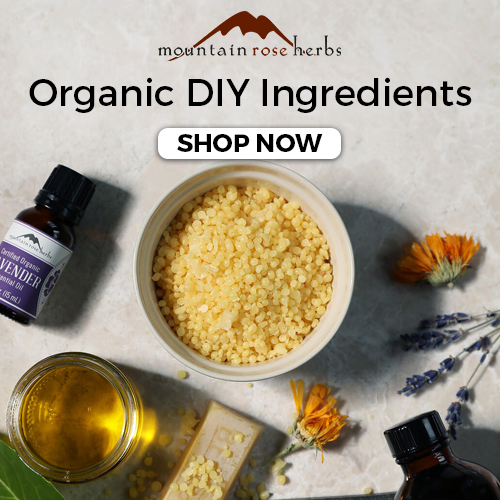 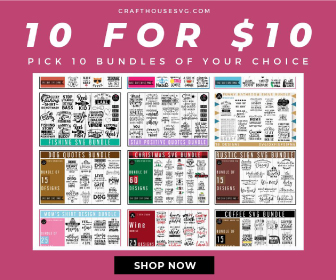 Wishing the best of luck to Olympian @lindseyhoran

THM Mega Sale today!!! Click the link in my #insta

Get Immunity Roll-On And More 50% Off @rockymounta

Who Wants Free Steak And Lobster? Go to my profile

Once again @dermae has captured my ❤️ with the

Save 20% On All Single And Blend Essential Oils At