Home / Books / Sixty Acres and a Bride by Regina Jennings. Kindle Fire giveaway & Facebook party!
♥ If you love this post, please consider sharing it & leaving a comment below! ♥ 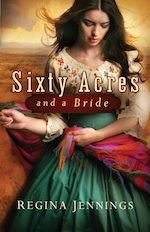 Sixty Acres and a Bride by Regina Jennings is a hilarious novel! Sure, it is a Christian romance novel but the characters are really funny and well written too. Rosa Garner, from Mexico, married someone she thought would love her forever. But right before his death in a mine accident, she realized he never had. With both her father-in-law and husband dying in the mine accident, Rosa and her mother-in-law decided to head back to Texas to the family land.

The taxes were due and were more than they could afford but the two women were determined to do what they must to save their farm. Rosa’s culture and customs are much more different than the American customs she is now faced with. She is beautiful and wears brightly colored clothing with intricate handwork. She has an accent doesn’t grasp all the different American sayings. (I don’t always either and I was born and raised here! hehehe) But as hard as she tries to fit in, she stands out more because of it. The family is extremely accepting of Rosa. The towns women, not so much.

Her new cousin-by-marriage, Weston Garner, lost a wife several years back and still grieves deeply for her loss and blames himself. So, while he is always willing to help anyone who needs him, he keeps romance as far away from him as possible. Rosa, is also extremely leery of romance after her husbands death and betrayal. Rosa’s presence and the fact that the women need him makes that very hard for him and they keep being thrown together. Rosa gets herself into quite a pickle and REALLY needs Westons help. That makes it even harder for them to resist falling in love. But, boy, do they do everything they can to keep from it!

This story takes their friendship on many twists and turns. It shows how a man and a woman can be the best of friends and rely on each other. It shows how faith and determination can make things work out for the best. It was a joy to read. I read it in just a couple of days because it was yet another I didn’t want to put down. The descriptions of Rosa’s clothing and their home was wonderful. It made you feel a part of the story. Weston and Rosa’s hurt was written in a way that made you really feel it. This book is on my shelf along with my other favorites! 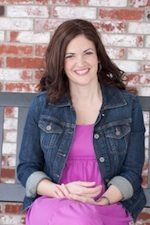 About Regina:
Regina Jennings is a graduate of Oklahoma Baptist University with a degree in English and a history minor. She has worked at The Mustang News and First Baptist Church of Mustang, along with time at the Oklahoma National Stockyards and various livestock shows. She now lives outside Oklahoma City with her husband and four children. Meet Regina here.
Learn more about Regina by visiting her website, www.reginajennings.com.

Link to buy the  book. You can also find it in our reviews store. The link is at the top of the blog.
Follow the rest of the Litfuse blog tour for Sixty Acres and a Bride.
GIVEAWAY AND FACEBOOK PARTY!!!!

Win a Kindle Fire from @ReginaJennings in the Sixty Acres and a Bride Giveaway! RSVP for #Facebook Party on 3/27.

Celebrate with Regina by entering to win a Kindle Fire and coming to her Author Chat Party on 3/27!

One fortunate winner will receive:

So grab your copy of Sixty Acres and a Bride and join Regina and friends on the evening of March 27th for an evening of fun.

Don’t miss a moment of the fun. RSVP TODAY and tell your friends via FACEBOOK or TWITTER and increase your chances of winning. Hope to see you on the 27th!

Disclosure: I received a complimentary copy of Sixty Acres and a Bride as a member of Litfuse. All opinions are my own. no monetary compensation was received.

Next postTyson Breakfast Bread Bowls. Breakfast for Dinner with #TysonBreakfast