Home / Books / Train Station Bride by Holly Bush
♥ If you love this post, please consider sharing it & leaving a comment below! ♥

I just finished the best e-book! It is called “Train Station Bride” and is written by Holly Bush. 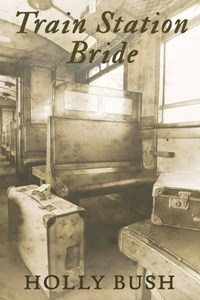 1887 . . . Julia Crawford, Boston debutante, travels to North Dakota to marry an aging shopkeeper and escape the ridicule she endures as the plump, silly daughter of one of Boston’s premiere families. What happens when the groom is not who Julia bargained for? Will her secrets keep her from love and acceptance? Or will Julia’s love be strong enough to conquer her past and give her the future she’s always dreamed of?

I love books that have twists and turns that make perfect sense to the story. This is one of those books. As for that “unexpected turn of events”, you sort of have an idea of what is going to happen while you are reading the story. But you’re not sure exactly how or when it is going to take place.

Once it does, the story becomes a fast paced read. I love that the characters tell each other from the get-go how they feel and what they have in mind for their futures. Even though there are some secrets that don’t come out til later, they make sense and aren’t long and drawn out for chapter after chapter, with an ending that leaves you hanging, like some of the books I’ve read.

The only thing that seemed to be “left out” for me was more of Jacob Snelling‘s story after he met Julia. His own story could have been mentioned just a little bit more so that we could understand better some of the comments from other characters.

Other than that one itty bitty thing, it was a fantastic book! Read an excerpt of Train Station Bride.