Home / Books / Blue Moon Promise by Colleen Coble Book ReviewReview
♥ If you love this post, please consider sharing it & leaving a comment below! ♥ 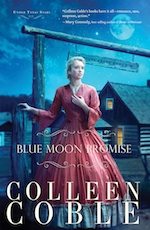 I am a big fan of westerns and romance. When you combine those, I’m a giggly, giddy girl. I love Western, Christian Romance novels. Blue Moon Promise was a great book to read. Lucy (I love that name!) and her siblings ran out of money and safety after their father passed away. When danger began lurking around their home, a stranger made her an offer she couldn’t refuse!

Lucy accepted a proxy marriage and stunned her new husband with her, and her siblings, arrival. Nate, like any unsuspecting new groom didn’t know what to do. But, after he realized the danger had followed Lucy, he realized he had to protect her. Afterall, he is an upstanding, Christian man… with a new wife!

I’m not going to spoil the story and tell you if they ended up falling love or if their marriage made it or not. But I will tell you that this was a very nice, well written story. Both Lucy and Nate are Christians and both believe in the sanctity of marriage. They know that you can’t lie to each other so the book is written without a ton of length between secrets being revealed. This is one thing that I REALLY enjoy about this book. It gets right to the point without dragging the plot out to long. But it gives you enough action and story to keep it interesting. These are the types of stories I like to read.

About the book:
Book Number One in the Under Texas Stars series
A love like Lucy and Nate’s only comes along once in a blue moon . . .
Lucy Marsh’s worldly resources are running out, but she’s fiercely determined to care for her younger brother and sister. When she discovers that their father’s recent death was no accident, Lucy is eager to leave town. She accepts a proxy marriage she believes will provide safe refuge. But trouble follows her to Texas where her new husband is surprised to suddenly have a wife and children to care for.
Nate Stanton always hoped he’d marry someday, but running the family ranch meant he had no time for romance. When his father deposits Lucy Marsh—a city girl—on his doorstep, with two siblings in the bargain, he expects ranch life will send her running on the first train out of town. But Lucy is made of tougher stuff than Nate imagined. When danger moves in, Nate finds he’d give anything to protect Lucy and the children he’s grown to love. Even if it means giving up his ranch. 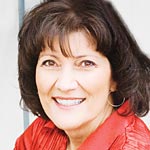 Best-selling author Colleen Coble’s novels have won or finaled in awards ranging from the Best Books of Indiana, ACFW Book of the Year, RWA’s RITA, the Holt Medallion, the Daphne du Maurier, National Readers’ Choice, and the Booksellers Best. She has nearly 2 million books in print and writes romantic mysteries because she loves to see justice prevail. Colleen is CEO of American Christian Fiction Writers and is a member of Romance Writers of America. She lives with her husband Dave in Indiana.
For more about Colleen and her other books visit www.colleencoble.com
Link to buy the book: https://www.thomasnelson.com/consumer/product_detail.asp?sku=1595549153&title=Under_Texas_Stars_#1__:_Blue_Moon_Promise
Kindle Giveaway and More! Save the Date – 3/13!

Disclosure: I received a complimentary copy of Blue Moon Promise as a member of Litfuse. No monetary compensation was received. All opinions are my own.