Home / Books / Taming Jenna By Charlene Raddon
♥ If you love this post, please consider sharing it & leaving a comment below! ♥ 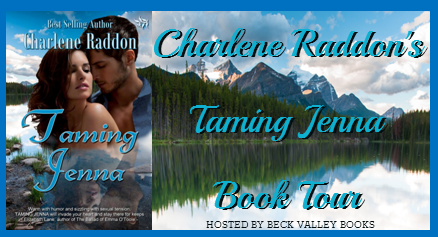 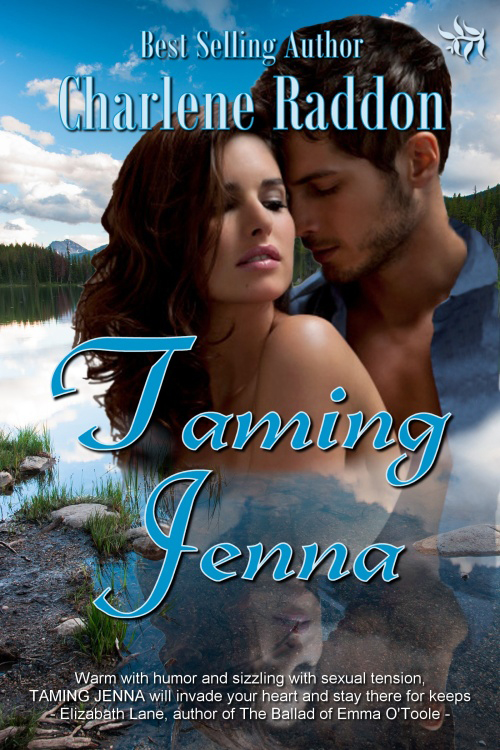 Deserted by her father at the tender age of seven, Jenna Leigh-Whittington had taught herself to ride, shoot, brawl…and steer clear of the opposite sex. But now, in a lonely Utah canyon, the Pinkerton agent has drawn her gun on a rugged stranger—only to discover that, far from the dangerous outlaw she’d been tracking, he is Branch McCauley, hired gun…and the most irresistible rascal ever to tempt and torment a woman!

If there’s one thing McCauley trusts less than a female, it’s a female who packs a six-gun. But what a woman! Vowing to bring the sensuous hellcat to heel, McCauley has no inkling that their passionate battle of wills has just begun. Taming Jenna will be the most seductive—and satisfying—job he’s ever taken on.

Taming Jenna by Charlene Raddon is a great romantic western. Jenna is one of those characters that, while she still gets herself in some sticky situations, is headstrong, smart and very brave. She is on a mission to find someone and NO ONE is going to stand in her way. She is determined to never allow herself to fall in love. Jenna is a tough cookie.

I love the way she is written. She has just enough spunk and sass to make her seem tough while still having femininity. She can go from a “boyish” bounty hunter to sexy vixen in a heartbeat. I like that this character is independent. There are times when you see her vulnerability and it makes her seem real. You can understand her reasons for swearing off love and you can appreciate her shying away when she thinks her heart is softening.

Branch is big and burly and oh so sexy. I keep picturing a lumberjack when I think of Branch. (P.S. That picture up there in the cover does NOT resemble Branch McCauley in the least little bit. You’ll know why when you read the novel. 😀 ) There are some lines that I don’t think this man would have really uttered to a woman. It was a little more romantic dialogue than I would have expected. That sort of threw me a little. But I love the way he was written as well. He has a heart of gold but can get things done when need be.  Although, there is one part in the story that left me wanting to kick him hard and fast right between the legs! No matter what secrets of mine had come out, nothing excuses his actions in a certain part of the book and he would have rued that day he’d met me. If you want to know more… read the book!

Rembrandt. I had a feeling about his role in this story from the beginning of seeing him. Then those initial feelings were thrown and I wasn’t sure about him. I loved him all the way through the story, though. I wish that he’d had a bit more action in the story. I think that would have really made us root for him.

Black Jack Mendoza. WHO WEE! What a fellow! He is as slippery as “snot on a doorknob”. Here you have this “murderer” that everyone is out to get. They all want him dead. But as a reader, you fall in love with him and want so badly for him to be innocent. He has charisma and charm that are genuine. He can woo the ladies AND the men!

There are other characters in this story that you’ll love, but those are the ones in the forefront. If you love romance novels and/or, you’re going to love Taming Jenna!

Charlene began her writing life at an early age, often penning stories where she cast herself as the heroine. It was after college when she dug out her old college typewriter and started her first novel, which came from a spirited dream she’d had the previous night.

While that book never sold, her second novel did. Tender Touch became a Golden Heart finalist and earned her an agent who signed the book, and two others, in a three book contract with Kensington Publishing. Kensington went onto publish five of Charlene’s western historical romances: Taming Jenna (1994); Tender Touch (1994 Golden Heart Finalist); Forever Mine (1996 Romantic Times Magazine Reviewer’s Choice Award Nominee and Affaire de Coeur Reader/Writer Poll finalist); To Have and To Hold (1997); and as Rachel Summers, The Scent of Roses (1999).

Charlene took a break from publishing, but not from writing. A Kiss and A Dare is Charlene’s first paranormal romance.

Divine Gamble is Charlene’s latest work and won first place in the western historical category of the 2010 Romance Through The Ages contest.

When Charlene isn’t writing, she loves to travel, do genealogy, digital scrapbooking and dyes eggs in the Ukrainian style. And she enjoys camping and fishing with her husband in the Utah wilderness.