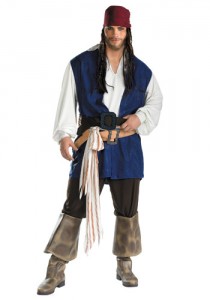 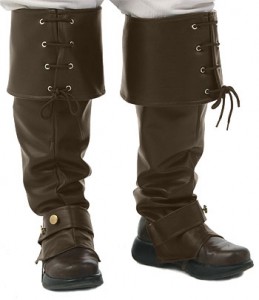 Every October, my husband and I host a Halloween Costume party for our family. Adults and children are all invited. We usually have a group party early in the evening for all ages and then later, the kids go to the kids room for movies and popcorn while the adults enjoy cards, adult beverages and conversation. Everyone is welcome to stay the night afterwards.

Last year Hubby was a pirate and I was a vampire. This year, we are going as the same thing but changing the costumes up a little. Sort of giving them a refresher. You may remember me posting a few months ago that my daughter wanted the entire family to go as pirates and her costume. My son and middle daughter decided they don’t want to be pirates after all so three of them are going as pirates, my middle daughter is going as “Spider Princess”, my son as a Grim Reaper type costume and me, again as a Vampire/Goth. I can’t wait! My Husband received his Jack Sparrow Costume from BuyPirateCostumes.com and we both couldn’t be happier. The costume is well made and has plenty of room for movement. The shirt and vest are attached and the pants have an elastic waist.

My husband said he thinks it fits very well and is made to hold up throughout an entire evening of fun.

I think he looks quite dashing as Captain Jack!

The Plus Size Jack Sparrow Costume come with the following:

It doesn’t come with boot tops or a hat, so I ordered the Brown Pirate Boot Tops to go with it. They have a pretty great assortment of costumes for men, women and children and even have plus sizes.

Disclosure: We received a complimentary costume to facilitate this review. All opinions are my own and/or those of my husband. No monetary compensation was received.

Next postLove on the Line by Deeanne Gist. @Litfuse Book Tour Review.