Home / Day-to-Day / GMC’s “Christmas with a Capital C” Christmas Movie (Video included)
♥ If you love this post, please consider sharing it & leaving a comment below! ♥ 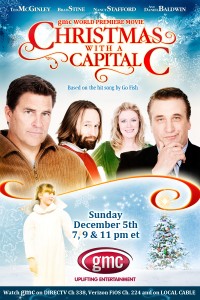 Daniel Baldwin & Ted McGinley star in in GMC’s first GMC World Premiere Christmas movie, “Christmas with a Capital C,” this coming Sunday, December 5th premiering at 7pm ET/ 4pm PST and will encore at 9 p.m . ET and 11 p.m. ET. I believe this movie will be repeating a couple times so check your local listings in case you can’t make the first air time.

Check out the trailer below:


‘Tis the season to be jolly, but holiday traditions are under attack when lawyer Mitch Bright returns to his hometown of Trapper Falls, Alaska. Residents of the small town who once looked forward to each year with enthusiasm and taking great care to drape the town with Christmas cheer every season, find themselves in the heat of a legal battle with a former member of their community. Christmas with a Capital C stars Daniel Baldwin (Cold Case) as Mitch Bright and Ted McGinley (Married with Children) as Mayor Dan Reed. High School rivalry between the two re-ignite over a Nativity scene in the town square. Nancy Stafford plays Reed’s wife. Brad Stine plays Reed’s brother. The movie is based on the song “Christmas with a Capital C” by the Contemporary Christian band Go Fish. The Go Fish video for this song has received over 15 million views online.

“Christmas with a Capital C is based on what has been referred to as ‘the war on Christmas,’” said Leslie Chesloff, executive vice president, programming, GMC. “The movie delivers provocative subject matter and rich performances by an ensemble cast of talented actors. The quaint community and picturesque landscape of Seward, Alaska lent itself beautifully to the storyline of this movie,” she continued.

A complimentary screening of “Christmas with a Capital C” was received as a thank you for this post. No monetary compensation was received.