Home / Travel / Blogging In The Smokies / Our Fall Visit To Titanic Pigeon Forge. Slideshow Included.
♥ If you love this post, please consider sharing it & leaving a comment below! ♥

I love going to a few of the local attractions when we go on vacation. We don’t always get to do much, but we try to always do at least one thing. This past October, when we visited the Smoky Mountains we decided to visit Titanic Pigeon Forge. 2012 celebrated the 100th anniversary of the awful Titanic disaster. So we thought it would not only be a fun experience, but an educational one as well. 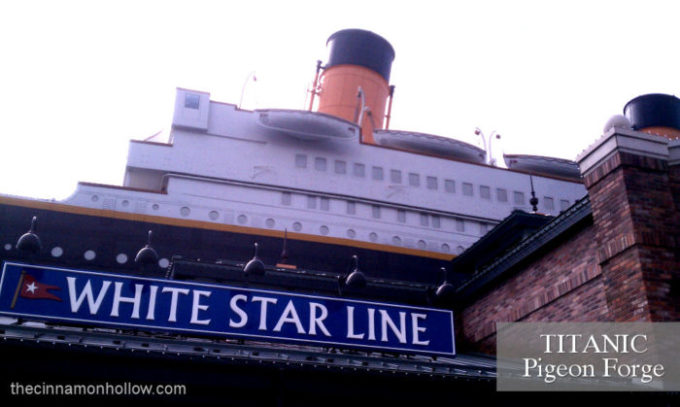 Due to copyright laws of the donated memorabilia inside, you aren’t allowed to take photos inside the exhibit. But you can take photos on the outside. I have a slideshow below as well as on this page of the photos that we took outside. 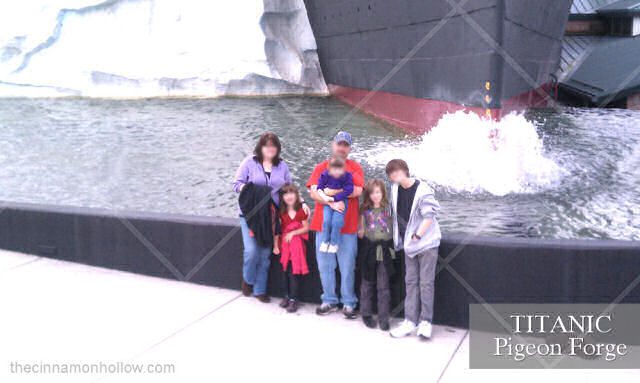 I also have some media photos, generously donated by the awesome folks at Titanic Pigeon Forge so I can show you some of what you will see inside. I have to tell you, it is truly breathtaking! The exhibit is only a portion of the size of the real Titanic and it is huge. I was in awe and couldn’t even begin to fathom just how large the actual ship was. 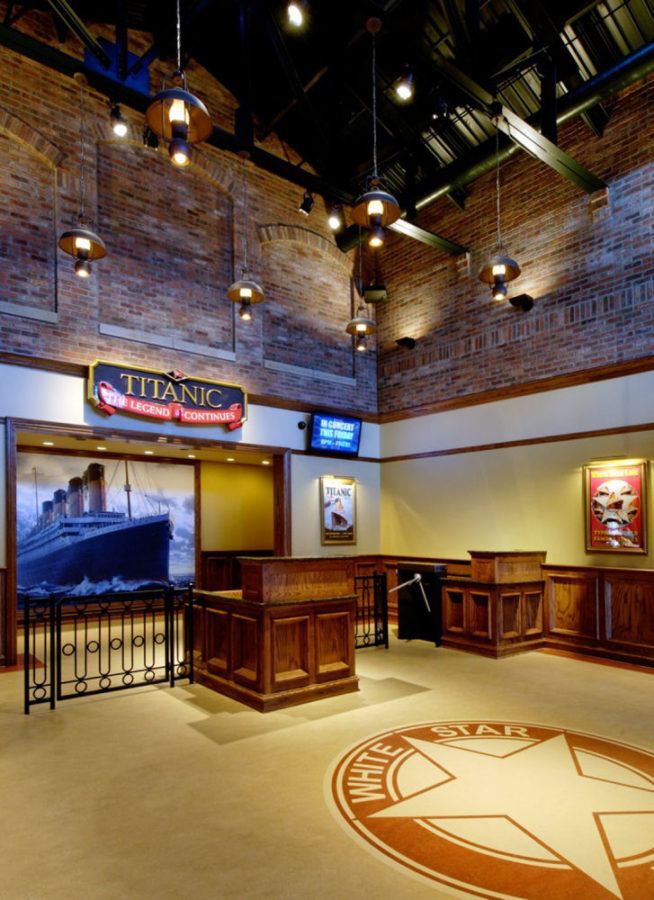 When you first enter, you will see the lobby where you purchase your “boarding pass”. You will receive a boarding pass with the name and history of a REAL Titanic passenger. The card gives you a little info about their life. BUT you won’t find out if your person survived or not until  the end of the tour when you visit the Memorial Room where all of the passengers are listed. There, you will see if they survived. 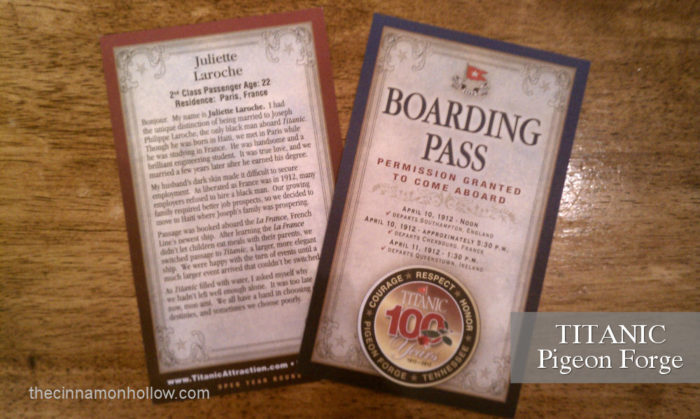 I have to tell you, it is very emotional going through this exhibit as a passenger, knowing that you are studying the lives of real people who may have perished. People watch the movie, hear the story, etc. but I don’t think we really give thought to the fact that it is a true story until we go through the exhibit and see and hear it. I had chills and was on the brink of tears throughout the entire visit. Reading about families and children, mother’s, father’s, rich, poor all going through this major event together. All fighting for their lives in that frigid water and not knowing if they would be alive in the next 5 minutes. It was a very awakening experience. 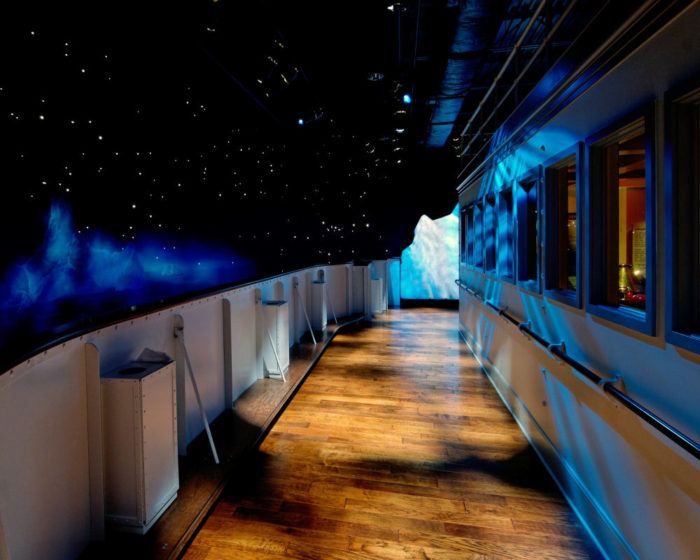 There is a room (pictured above) that has a real, live, growing iceberg as well as a pool of water that you can stick your hand in. This water is chilled to the exact temperature of the waters on that night. 28 F°. My hand began acing the second I stuck my hand in the water. I could only leave it in there for a few seconds. I tried to imagine what it would feel like to have your entire body dunked in there and to be stuck there. I couldn’t It was so unbelievably cold that just having my hand in there, I couldn’t even think. I admit, just thinking about it makes me cry. 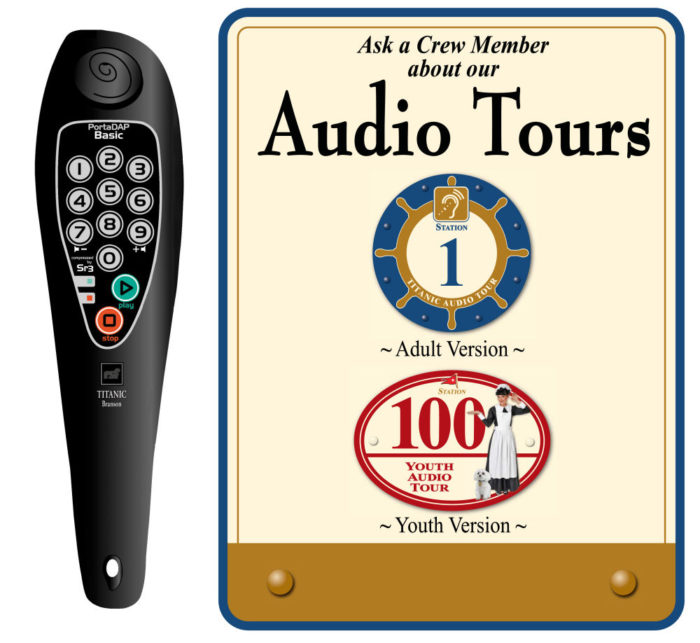 At the start of the self-paced tour, you are given a listening device and there are cards on the wall in certain sections. When you see a card you enter a number on your device and listen to the info about that display. Some have sounds that you would have likely heard that night like screams when the ship hit the iceberg or shouts of help. 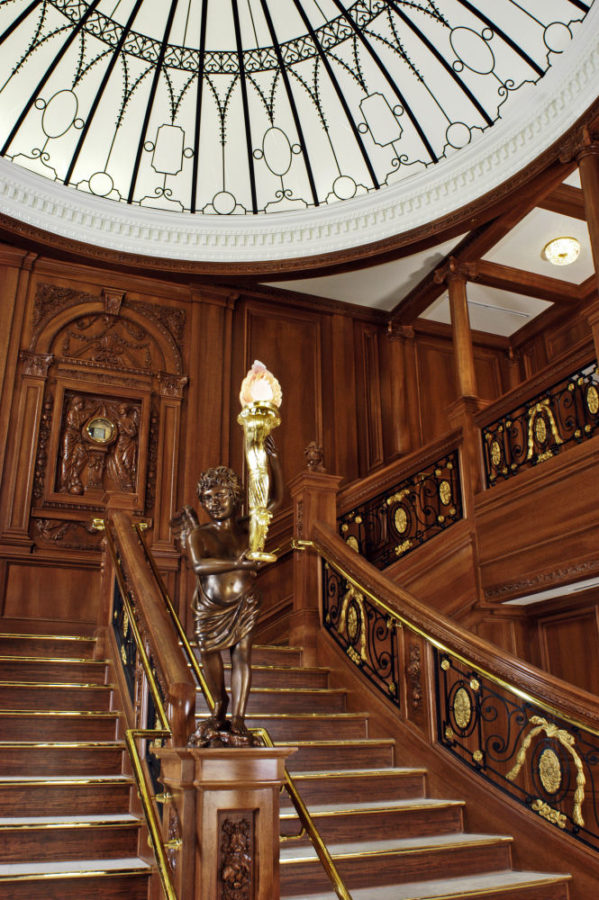 There are replicas of many features and rooms of the actual Titanic including a third-class room and the Grand Staircase which were vastly different from each other. Although the third-class rooms were still considered lovely and well appointed. 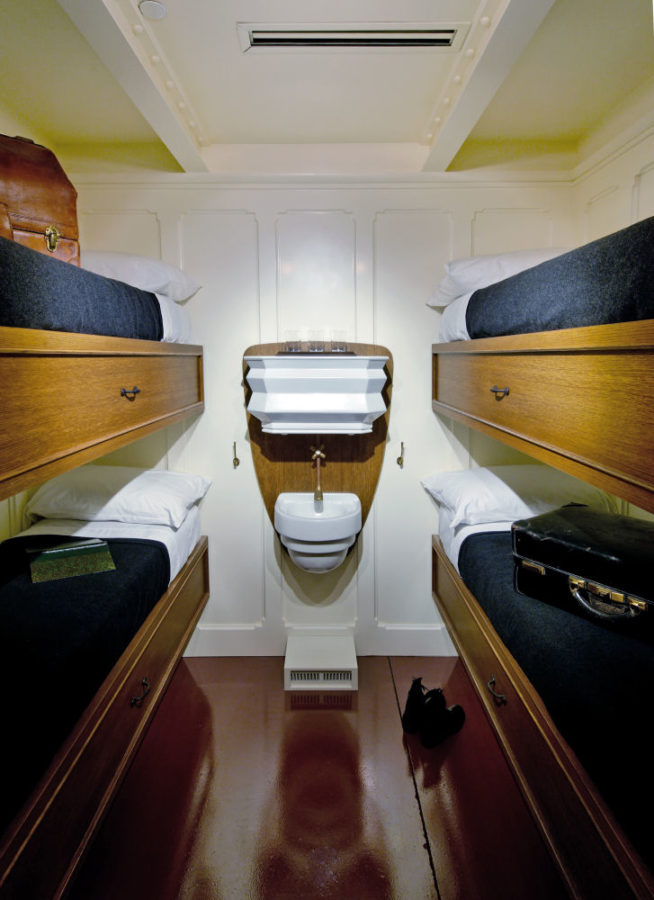 A funny thing you learn there is that the flooring in the Grand Staircase was made from the most fashionable and expensive material of that time… Linoleum! The cheapest thing you can buy today was a big budget, high-end material then. It’s funny to hear that. I have to say though, for the time, it  truly was a gorgeous ship inside. 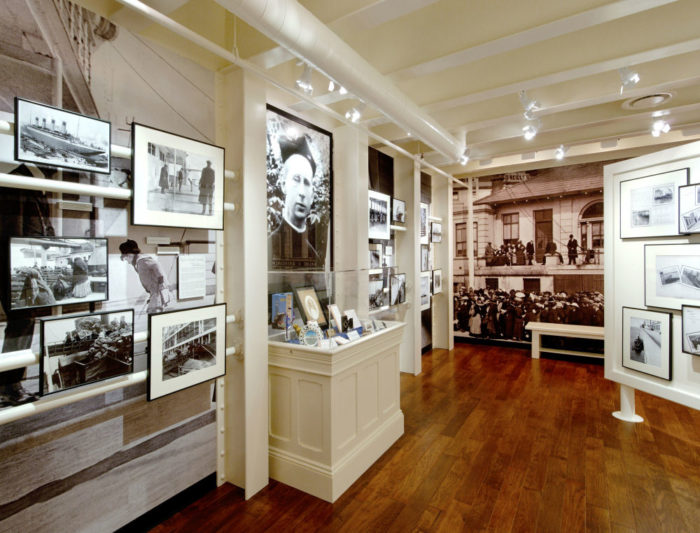 There are many displays and a lot of info about many of the passengers including Father Browne (Jesuit Priest and a prolific photographer) who was the photographer of many of the Historic photos that you have seen of the RMS Titanic.

Even though we couldn’t take photos inside, we were able to have a group photo taken and purchase it on the way out along with a keepsake frame and folder. We were a large, very tired group and not all of us were smiling but we all fit! 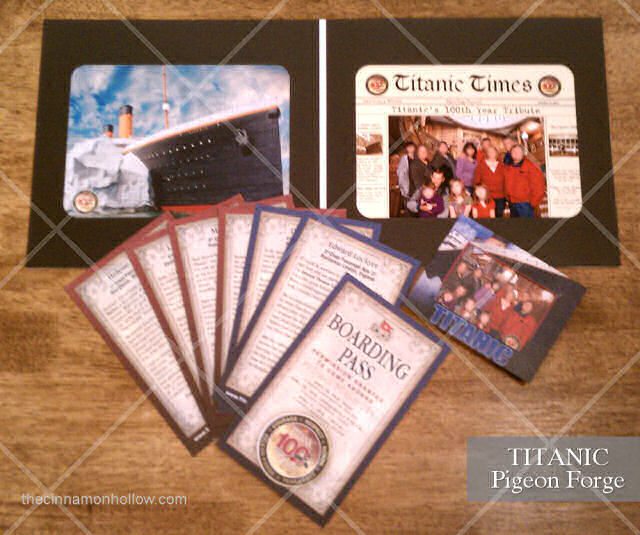 There really is a lot to take in and there are usually quite a few people there so we plan on going back, hopefully this spring and taking the tour again. Our youngest was quite fussy so I didn’t get to read as much as I’d have liked. I can’t wait to go back and go through again as another passenger from the White Star Line RMS Titanic in Pigeon Forge, Tennessee.

If you are in the Pigeon Forge, Tennessee or Branson, Missouri area I HIGHLY recommend taking this tour!

I may be giving away a Family Pass in a couple of weeks so be on the lookout for that!!!!!

Next postUntimed By Andy Gavin