Home / Travel / Blogging In The Smokies / Fun At OktOBERfest Ober Gatlinburg
♥ If you love this post, please consider sharing it & leaving a comment below! ♥

Last fall I posted over on Vacation Maybe about how disappointed I was that we missed OktOBERfest Ober Gatlinburg when we went there on vacation. Ober Gatlinburg is a family-friendly ski resort that features a fun Oktoberfest festival each October. We made it to Ober in November but had missed out on all the Oktoberfest fun. But we made it this year!

What Is OktOBERfest Ober Gatlinburg? 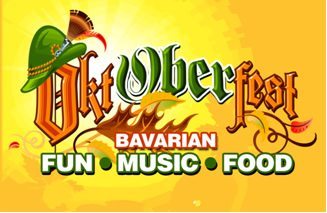 Oktoberfest was a popular event when the Heidelberg Castle operated its restaurant at Ober Gatlinburg in the 1980s, and for some of the Bavarian Fun Makers Band, it is like coming home as they are part of the original band.obergatlinburg.com

We love going to Ober Gatlinburg anytime of year but I’d always wanted to experience an Oktoberfest. They serve up traditional Bavarian food like Kohlrouladen, Wiener+Schnitzel, and Bauernschmaus as well as German beers (biers) and live music performed by the Bavarian Fun Makers Band. We experienced a little bit of everything.

The week that we went put a little bit of a damper on things though. As is the case with mountain weather, it is unpredictable, and it rained all week. We picked the driest day to head up to Ober and it was damp and cold. But that doesn’t mean we didn’t enjoy what was there! 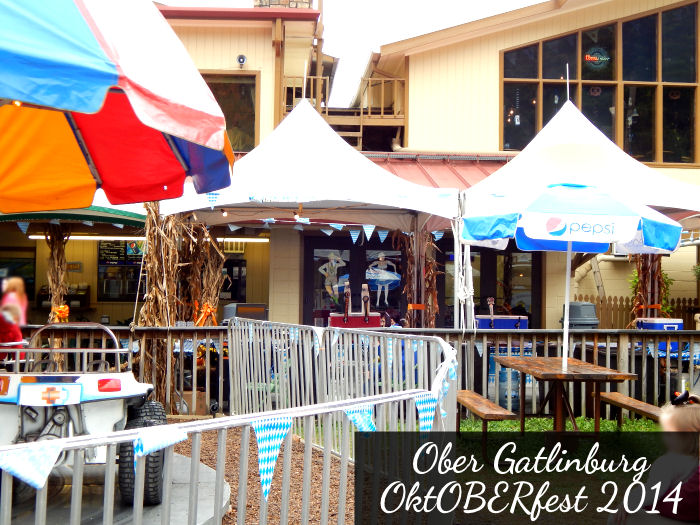 Clay bought a beer card that gave him 6 pints of beer so we could sample the different German varieties. Along with the food in the lounge, which we tried, there was also food outside. They had soft pretzels and the most delicious turkey legs I’ve ever tasted! 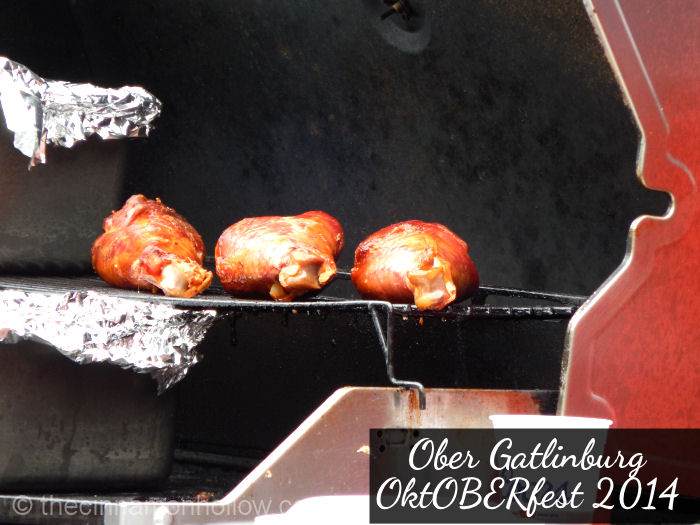 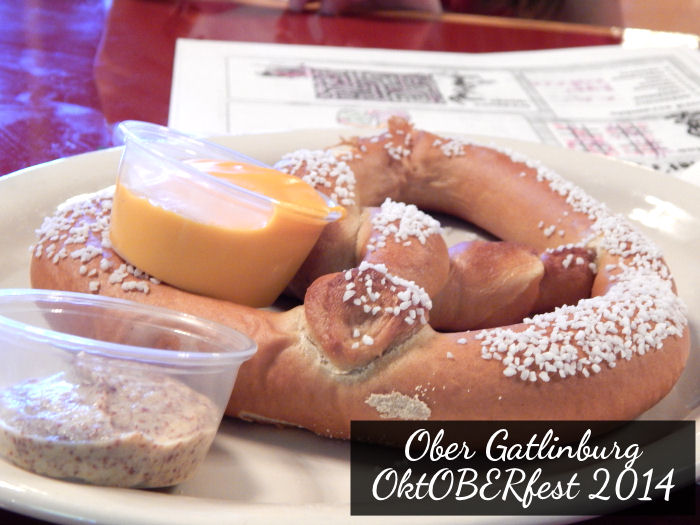 Because we planned on being there all day we knew we’d need to eat lunch and possibly a snack so we decided to eat lunch in the lounge restaurant where they had traditional Bavarian foods.  The meals there are around $10 – $15 each.

I ordered the Kohlrouladen which is Cabbage rolls stuffed with beef and rice and simmered in a tomato sauce. It is served with the best sauerkraut I’ve ever tasted and German potato salad. 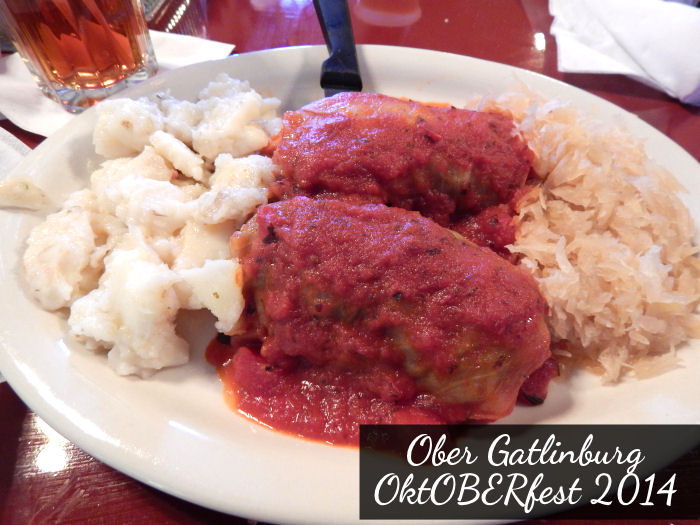 Clay got the Bavarian Platte which is a combination platter of kielbasa and bratwurst, beer steamed then grilled piping hot, served with sauerkraut, German potato salad and a side of multi-grain mustard. He said you could really taste the beer on the kielbasa and that it was really good. They had desserts too, like Schwarzwalder Kirschtorte which is a black forest cake, but we were all too full to try it. 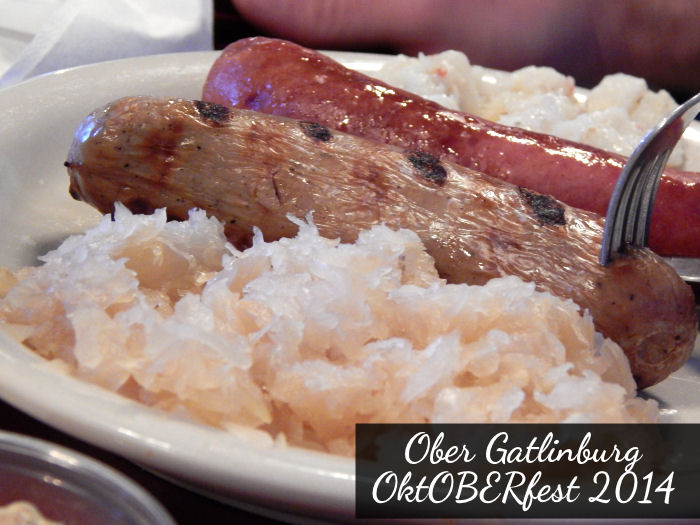 With our beer card, we sampled several different flavors and brands of beer but in the lounge we tried a Cottonwood Pumpkin Ale. It was a medium color and had a nice pumpkin finish to it. I’m not a beer drinker at all but I really liked the pumpkin flavored ales. 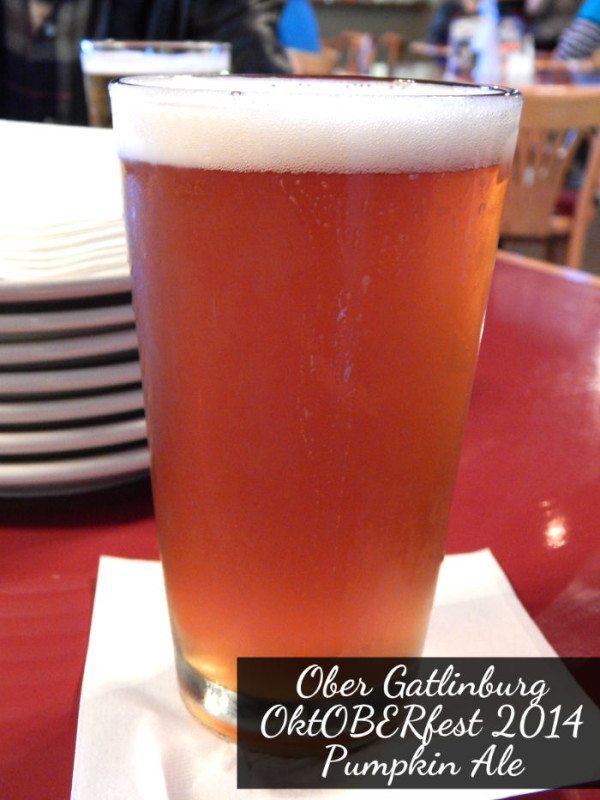 While we were eating in the lounge we enjoyed the entertainment from the Bavarian Fun Makers Band. Some are part of the original band from the beginning of Ober’s Oktoberfest celebration so it was really great to hear these guys that come back year after year to perform. The music was fun and even comical at times. Some of the songs they played were traditional Tennessee songs with a polka/oompah twist. Rocky Top sounds pretty darned good played on an accordion! 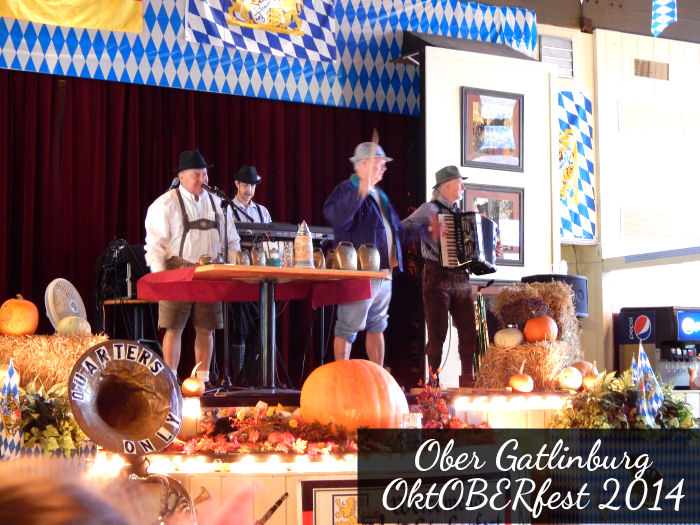 They also played The Tennessee Waltz and a lovely couple got up and did the waltz. Clay and our youngest daughter even took a little spin on the dance floor in a father – daughter dance when our little one asked her daddy to dance with her. It was the sweetest thing.

The Bavarian Fun makers band got the entire crowd involved in the fun by having them all dance up to the dance floor where they performed the Chicken Dance and the Hokey Pokey. The tuba player also made hi way around the crown allowing everyone to toss quarters into the tube. He has us all laughing when he put the tuba over our sons head and blew the horn (gently) and when he grabbed Clay’s goatee and yelled MEHHHH. at one time, we tried to toss a quarter in but it landed in one of the beers. We scooped it out and tossed it in and didn’t finish that particular beer! (good thing the beer was nearly empty 😀 ) It was so much fun!

If Oktoberfest isn’t your thing, you can still have loads of fun at Ober Gatlinburg. In the summer they have a water slide as well as the Alpine Slide and next spring they are opening a brand new Alpine Coaster similar to the Gatlinburg Mountain Coaster we also visited. In the winter they have skiing and snow tubing and year round they have ice skating, a merry-go-round, mini golf and various outdoor rides for the kids.

You’ll also want to make sure you ride the chair lifts up to Mt. Harrison for the most gorgeous mountain views. As I mentioned, previously, the weather didn’t play nice for us and I seemed to have repelled the sun at every turn. So I don’t have many great fall foliage or scenic photos for you but on a sunny day it is gorgeous up there!

I’ve heard a couple bad reviews of Ober saying that it is outdated. I have to disagree. Yes, some things could use some refreshing. There are a couple things that seem a bit outdated. But this is a 1970’s FAMILY resort and you can feel that when you’re there. It’s not huge but there is something about it that is so wonderful and they ARE adding new attractions to it all the time like the Alpine Coaster coming in the spring. I’d recommend Ober Gatlinburg in a heartbeat for family fun. Especially in the winter when there is skiing and snow tubing. My kids love it. Clay and I love it. And we will continue to visit there year after year after year, Lord willing. 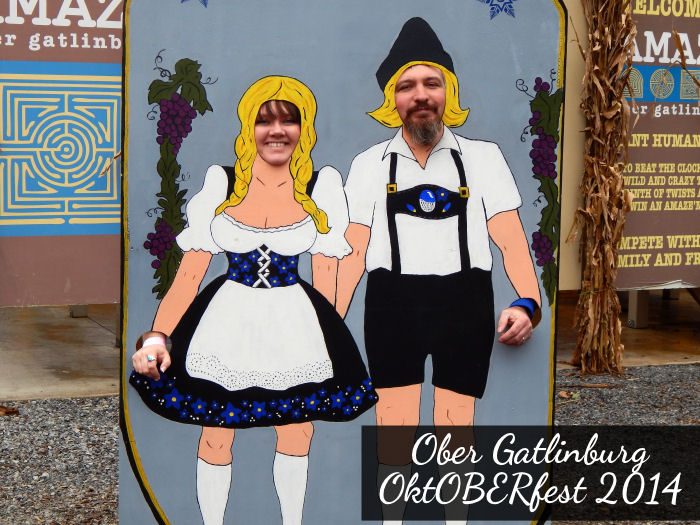 Have you ever been to OktOBERfest Ober Gatlinburg?