Home / Pets / Raising An Anatolian Shepherd. It Ain’t Easy!
♥ If you love this post, please consider sharing it & leaving a comment below! ♥

A few months ago, I introduced you to our newest furry family-member, Felina, an Anatolian Shepherd Livestock Guardian dog. She was, roughly (ruff-ly – see what I did there? 😀 ) 8 weeks old when we received her, from a farmer in another county. It’s been a while since I introduced her so I wanted to give an update on how it’s been going, raising an Anatolian Shepherd.

Anatolian’s are very headstrong and extremely stubborn. We have our hands full with her, even before additional and unexpected problems. It’s going to be difficult making her know that we are the ones in charge and not her. She doesn’t always want to listen.

It’s not been an easy journey, to say the least!

I had done quite a bit of research on this type of dog before we agreed to take her. So we knew from the get-go that she could be difficult to train as an indoor dog. We wanted to have her be a guardian, not only for our chickens, but also for us, so she was intended all along, to be raised mostly indoors, with time spent alongside the chickens. We also knew she was going to get really big. Oh boy! 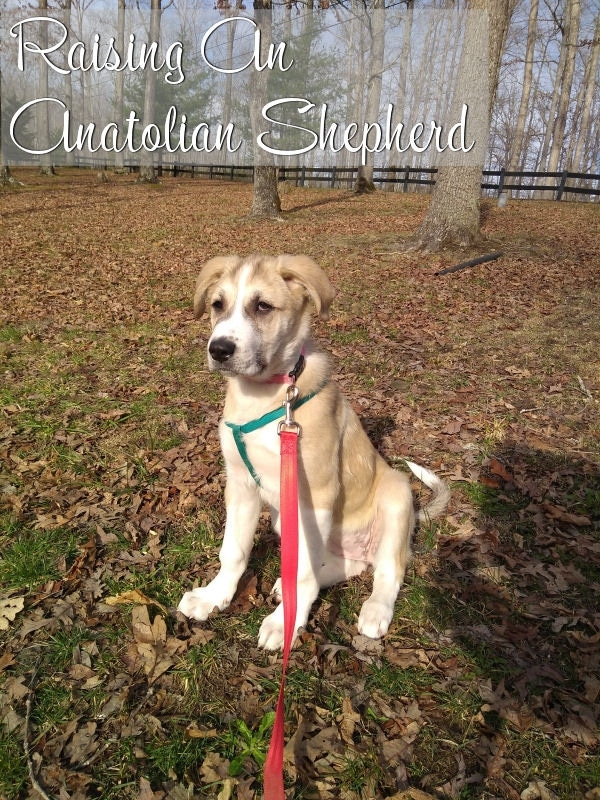 Knowing a dog is going to get big, and then seeing how quickly they get there is 2 different things. She is only 4 months old and she is already the same size as our Lab/Border Collie mix, Jasper. And he’s 3 years old! She’s a horse!!!

Also, she has been a bit of a pain in the rear to train. It’s not that she’s not intelligent. She is very, very smart. But she’s stubborn. Add to that the fact that she was apparently eat up with parasites and it has been super tough dealing with her, especially indoors.

The poor thing has not been worm-free since we brought her home! She was diagnosed with roundworms and we’ve tried 2 different types of medications. She’s had a dose nearly every week since we got her and she is still battling them. There were a couple weeks we thought she was in the clear so we stopped treatment. Then we saw worms in her droppings again and started on the 2nd medicine.

I do know that it is possible for her to be re-infesting herself but since we’ve been covered with snow since December, (we live on a mountain), we haven’t been able to treat the yard, yet. That is coming, though as soon as we dry out!

So.. she’s had diarrhea. A. Lot. We have carpet so my house now constantly smells like bleach and stinky dog. It’s been a mess. I’m very ready for warmer weather so we can get her outside more. And so we can get this carpet up and out of here! Wood laminate is on my to-do list! Much easier to keep clean and sanitized with indoor pets.

This past week, I’ve started adding pumpkin to her food, with 2 goals in mind. One, it will firm up her bowel movements and two, it will help with the parasites. So far, so good! No diarrhea!!! And, I haven’t seen any nasties.

So, I’m hoping and praying that we are past that. 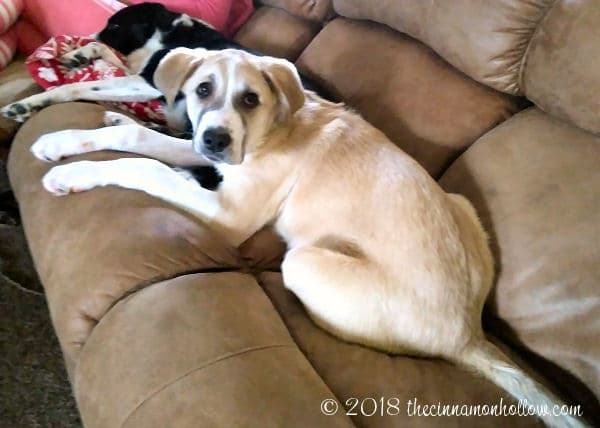 I think with the bathroom issues, it’s been harder than it should or even would be. It’s hard when your tummy is a mess.

We have a set of bells on the front door for the dogs to ring when they have to go out. Otherwise, poor Jasper just goes there, smacks the doorknob with his nose and then sits there waiting. We don’t always hear that so he just sits there, miserable. The bells, we can hear. Felina has been ringing the bells, for the most part and hasn’t had any accidents in the floor the last 2 days. So she’s learning.

She tears up everything in sight. There is not one thing in the house that she hasn’t chewed on. She would have toys but with the diarrhea, she messed on all of them and we had to throw them away. I’m not buying new ones until we get that in check first. So, she goes after everything she can find.

And since she’s so big and has paws bigger than my entire hand, that she uses like human hands, it’s hard to wrangle things away from her. She has growled at me a couple times, too, when trying to discipline her. I will NOT tolerate that! I won’t have a dog that I have to fear and so that is something we have to work on. She has got to learn that with the family, she is not in charge.

She has learned to sit when told and she goes to her crate if we tell her to go to her bed. She growls at the door when there’s something/someone that’s not supposed to be there.

Previous postMy Skin Feels Amazing Thanks To These Facial Masks!

Next postLooking Forward To Spectacular Views At The Summit Cabin!