Home / Travel / Blogging In The Smokies / Ski Mountain Coaster At Ober Gatlinburg
♥ If you love this post, please consider sharing it & leaving a comment below! ♥

Last year, we had a ton of fun at Oktoberfest at Ober Gatlinburg. So much in fact, that we decided to go back again. This year, though, we had something else we were really looking forward to while there. We were lucky enough to receive complimentary tickets to check out the brand new Ski Mountain Coaster that just opened up at Ober. 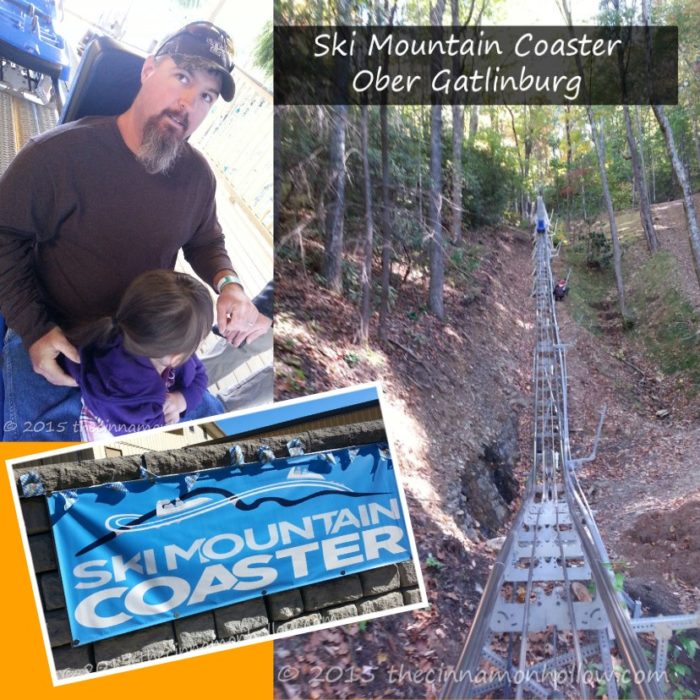 Clay loves mountain coasters. Our youngest daughter loves them even more than he does! She is a speed demon and has to go full tilt. She won’t let him break at all until the very end. She wants to go around those mountainous twists and turns as fast as possible. Which is around 25 miles per hour! I have to say, that can get pretty scary when your’re buckled in a little cart on the side of a mountain (she never bats an eyelash)! But, even though it’s scary, it is so much fun! 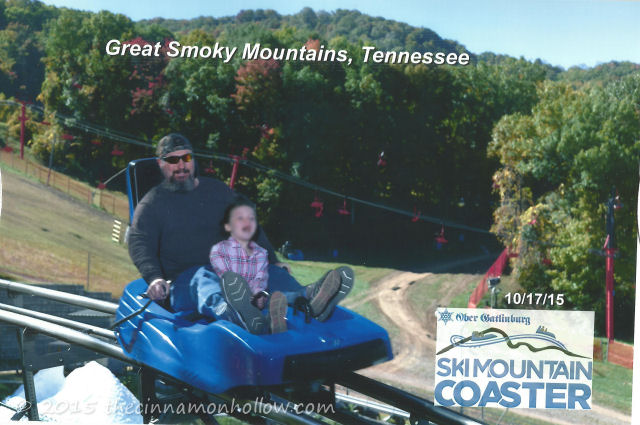 Now get this, the ride lasts  approximately 5 ½ minutes and covers approximately 3750 feet with a 1000 ft uphill ride. You don’t do a thing on the way up. Just sit back and take in all the pretty mountain scenery. Once at the top, push your brake forward and speed along 2750 feet. You will go along curves, twists and hills. If you don’t like to go full-out, pull your brake back to slow down. You don’t have to zip through at full speed, although that does add to the excitement. There are also safety features built in that will alert you if your seat belt isn’t fastened or if you’re too close to another rider. You need to stay around 80 ft apart but it has the built in collision avoidance to help keep you safe. I like that because my distance judgement is practically non-existent. Plus there are signs all along the way to tell you how far apart you need to be as well as when you need to go slower. 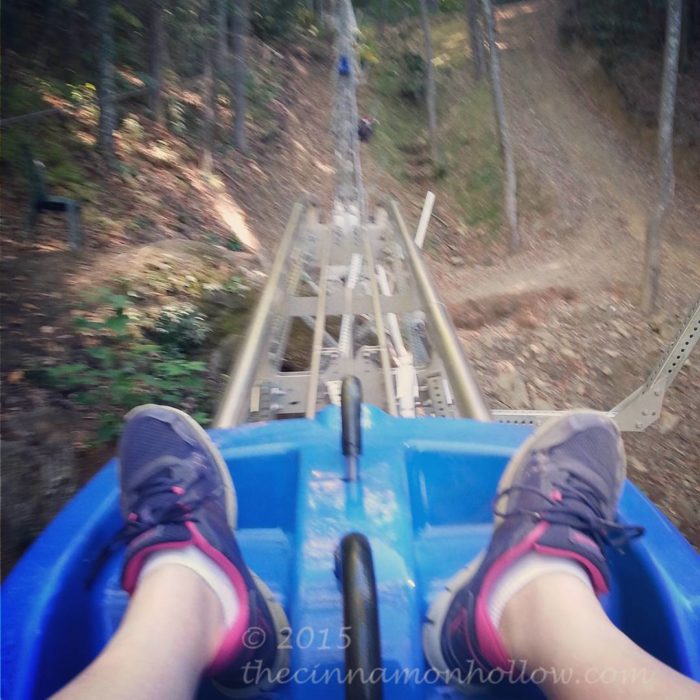 As excited as we were to get giant turkey legs, brats with sour kraut, pretzels and German Biers at the Beer Garden, we were most excited for the Ski Mountain Coaster and Alpine Slide. Of course, Clay did get a $20 beer card and I bought a souvenir Beer Boot with the best Pumpkin Ale. It’s Oktoberfest. We wanted to enjoy it! 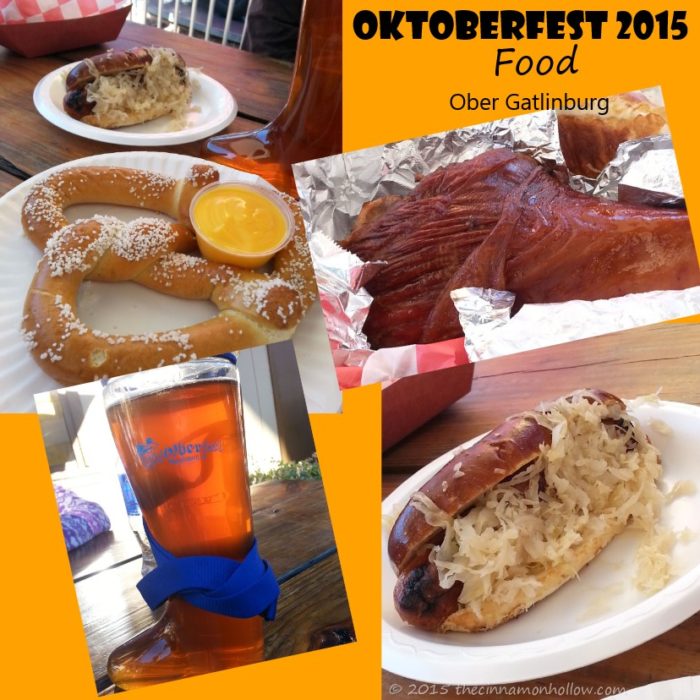 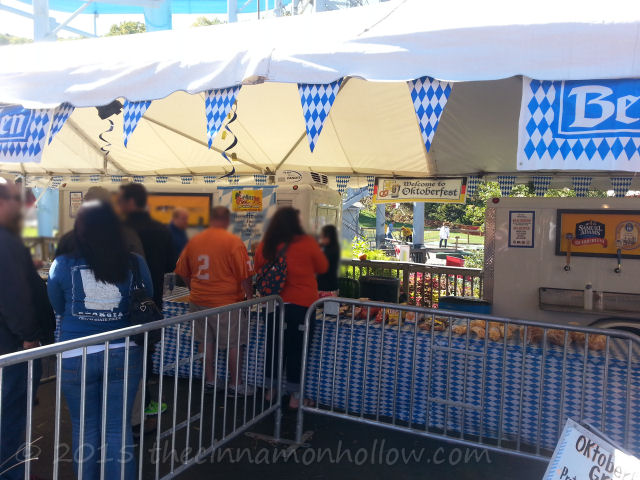 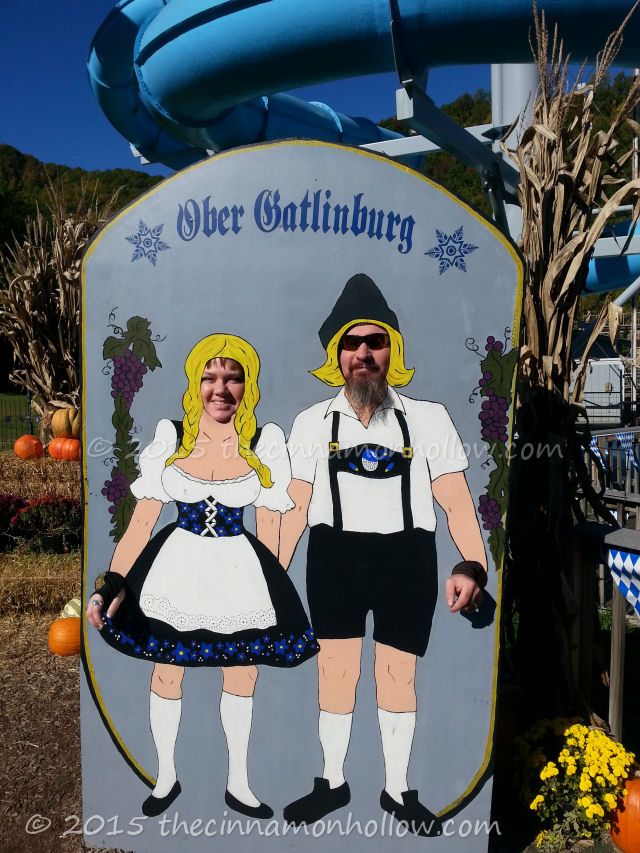 Ok, so we had the all day arm bands that covers all the rides. Except the coaster. You do need to buy tickets individually for the coaster and they are $15. That can get a bit costly if there is a large number in your group and you are the one paying. BUT,  the seats hold up to 300 pounds max. So if you’re below the weight limit you can ride two in a car like he did with our daughter. Don’t let the price worry you. It is so much fun and I definitely recommend doing it when you visit Ober. In fact, Clay went twice. Once with our daughter and once by himself.

Our other kids, and I all rode alone. Halfway through the ride you’ll see a flash as a camera takes your photo. You can view and purchase that at the end of the ride. We bought all of ours. It is fun to look back and see how scared you were or how much fun you were having on the coaster.

After riding the coaster, Clay and the kids rode the Apline Slide. The arm bands do cover that and you can ride as many times as you want. My knees were killing me that day and I felt like I was getting sick (which I was) so I skipped the slide. They all had a lot of fun though. To access it, you ride the Scenic Chairlift halfway up and then get off and come back down on the slide. Otherwise, you ride all the way up to Mt. Harrison for gorgeous mountain views, bluegrass music and coffee, hot chocolate or apple cider concessions. They also take your photo, for purchase, of you on the chairlift.

The chairlift to Mt. Harrison and the Ober Tramway are my favorite parts because of the views. On a clear day, especially in the fall, the views are spectacular! Gorgeous fall colors, layer after layer of mountain tops, clear skies. It was gorgeous the day we were there. 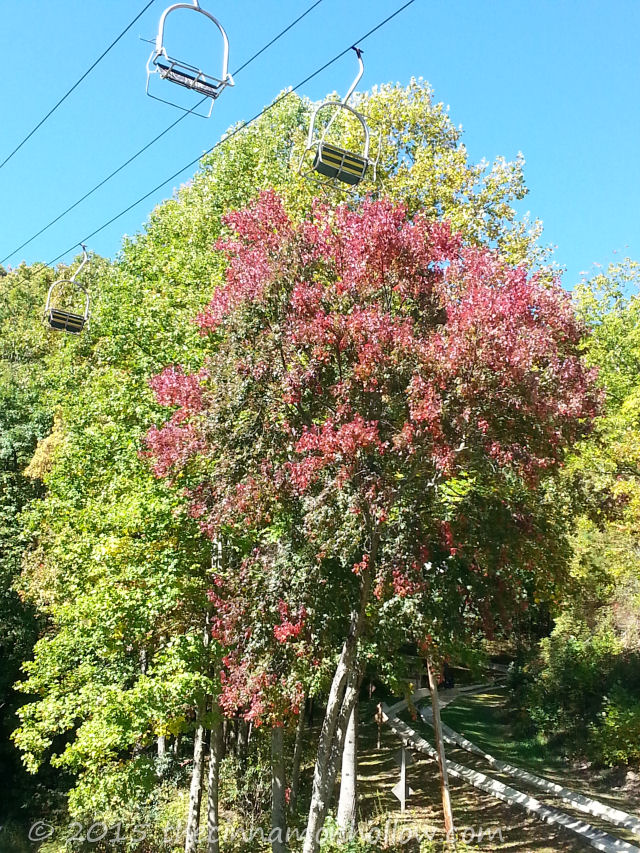 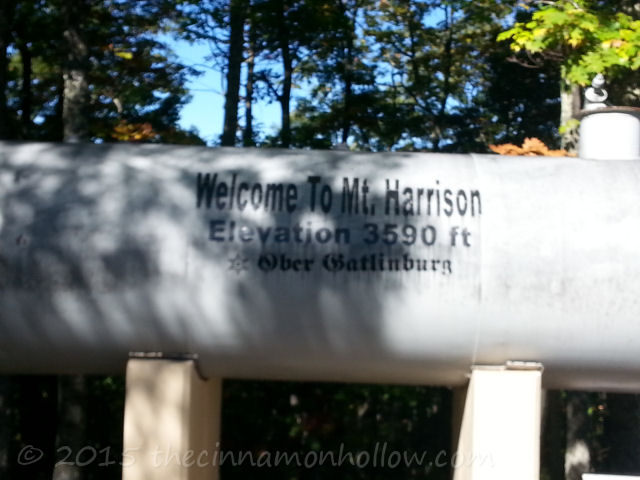 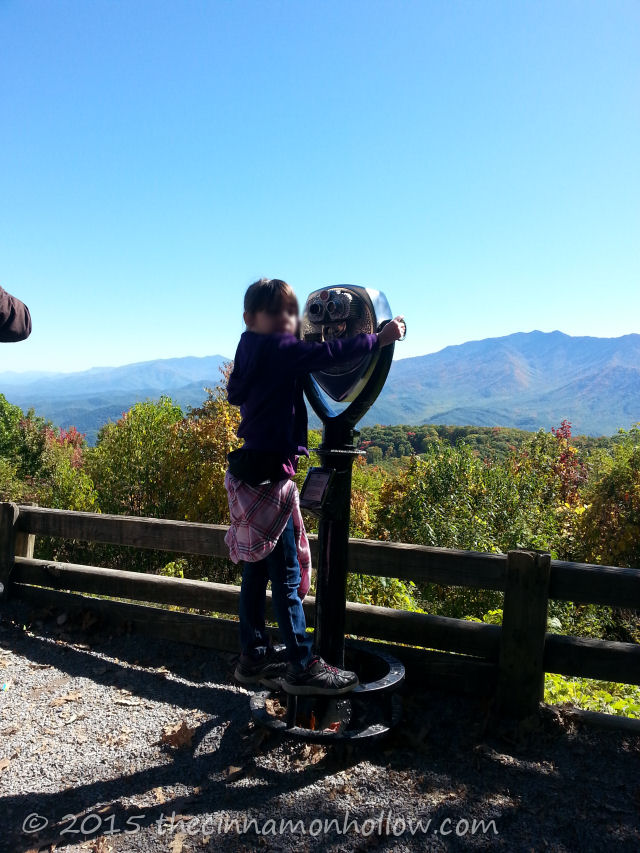 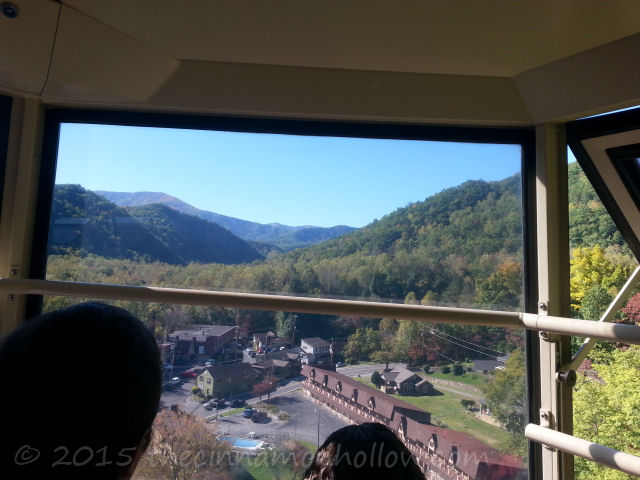 If the coaster and slide aren’t your cup of tea there are plenty of other things to do at Ober. There are shops, restaurant/lounge, ice skating, a wildlife exhibit, outdoor rides for the kids like a maze and swings. Our oldest daughter loves the ice skating. I think she could stay there all day long. 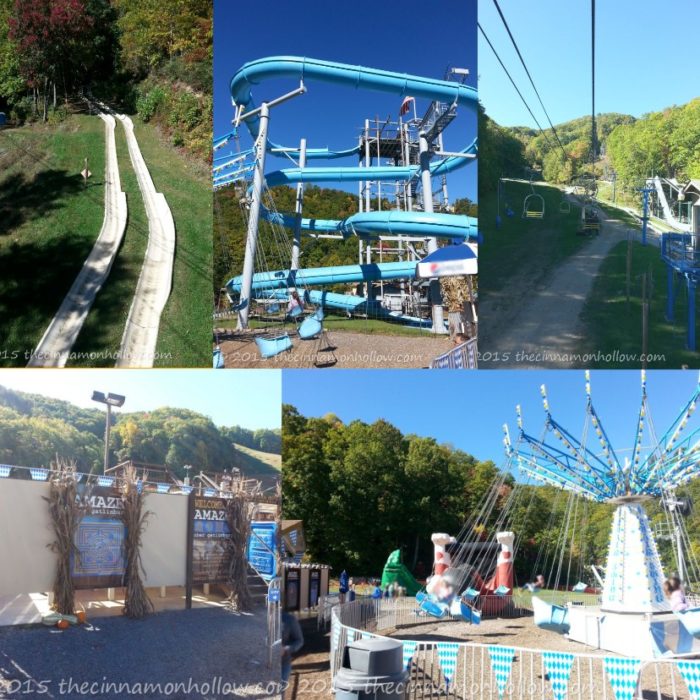 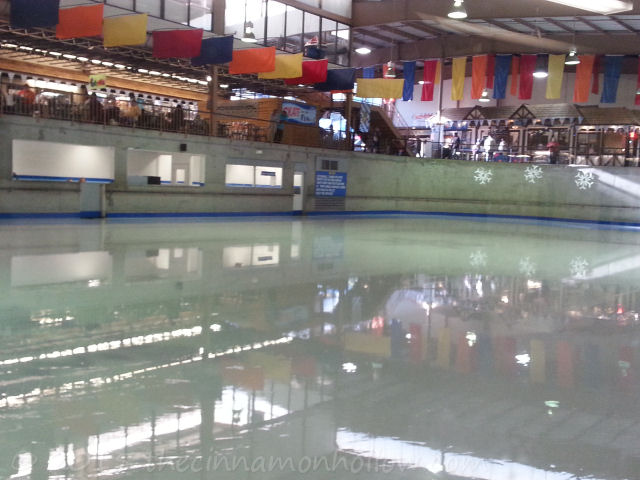 They make all their own snow at Ober Gatlinburg and as you can see in the photo, below, they had the snow machines amped up and blowing like crazy getting ready for the ski and snowtubing season. 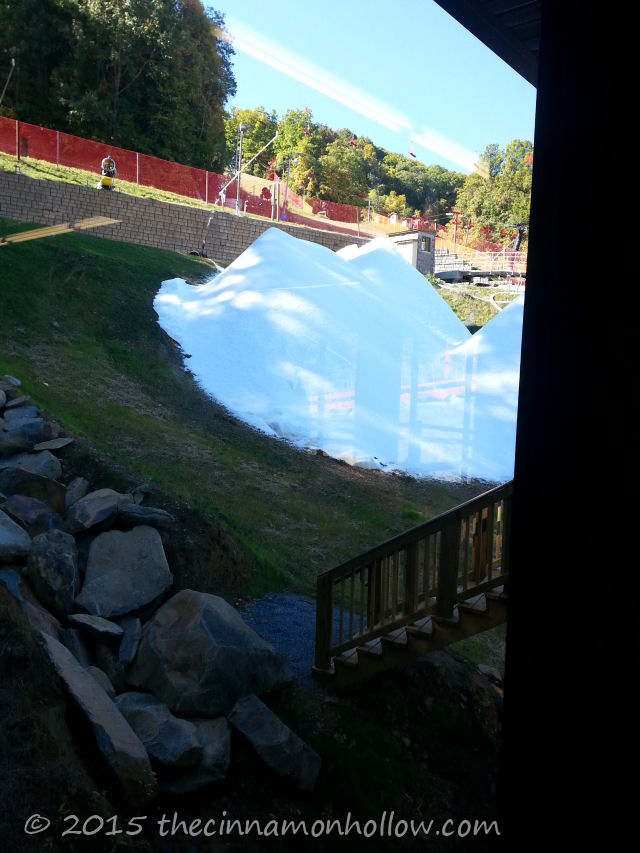 During Oktoberfest there is an Oompah band in the lounge. You can enjoy some German cuisine while watching the show. We did last year and it was hilarious. The guy playing the tuba grabbed Clay’s goatee and made a goat sound. Then he put his tuba on our sons head and blew it, Scared the crap out of him! Then everyone took turns tossing quarters in his tuba. They did the Hokey Pokey and other dances. It was a lot of fun. In the summer there are a couple of water slides that are also open and in the winter there is snow tubing and skiing. I really want to go in the winter for the snow tubing! 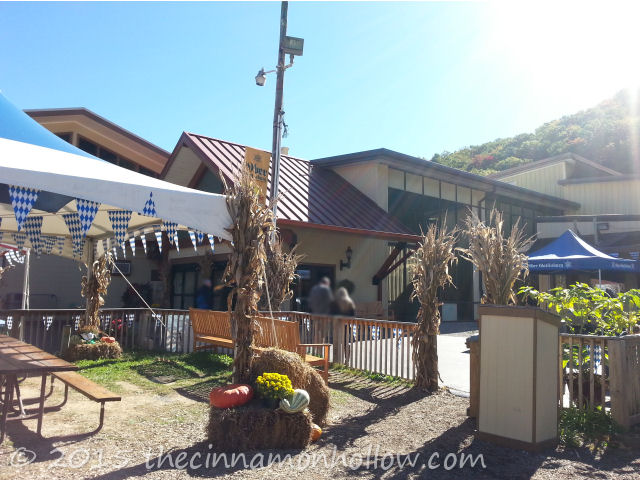 So, if you’re in the Gatlinburg area this October and you’re looking for some ski lodge type fun, check out Ober! Be sure to take a ride on the Ski Mountain Coaster while you’re there. It’s scary fun!